Markets quiet ahead of ECB meeting and US data

European shares expected to open higher, with investors betting the ECB will signal a further easing of monetary policy on Thursday 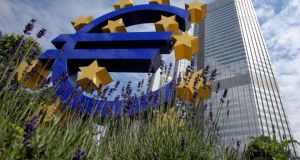 Markets are waiting for Thursday’s pronouncement from the ECB on the direction of European interest rates. Photographer: Hannelore Foerster/Bloomberg

Asian stocks eased overnight in sluggish trade as investors chose discretion over valour ahead of central bank meetings in Europe and the always-critical US payrolls report.

MSCI’s broadest index of Asia-Pacific shares outside Japan was just a shade softer at 478.58. Australian shares ended 0.4 per cent lower while South Korea lost 0.6 per cent. Japanese markets were closed for a holiday.

Mainland Chinese stocks were flat with the property sector weak after the southern city of Shenzhen was reported to be raising the minimum down-payment on second home purchases to stem rising prices. “It’s a slow start and people are cautious ahead of some key events later this week,” said Jackson Wong, Tanrich Securities’ vice-president for equity sales.

Major currencies were likewise mostly quiet. The dollar was still well supported in the wake of upbeat U.S. manufacturing data that stirred speculation the Federal Reserve might scale back its bond-buying in December, rather than in March as many in the market currently anticipate. No less than four Fed officials were to make speeches on Monday, starting with Fed Bank of Dallas President Richard Fisher in Sydney. Fed Governor Jerome Powell and the heads of the St. Louis and Boston Feds all appear later in the day. Fisher took aim at the U.S. government saying an ineffective, fractious and fiscally irresponsible government has slowed the US recovery and counteracted the stimulative effects of Fed’s super-accommodative monetary policy. The dollar index was holding firm at 80.725 having climbed to a six-week peak on Friday. It was also up on the yen at 98.74 and threatening a major chart target at 99.00. The dollar fared best against the euro which was undermined by speculation the ECB would have to ease again given disappointing news on unemployment and a startlingly low inflation reading. The common currency fell as far as $1.3442 on Monday, before recovering to $1.3488, still well below its recent high of $1.3832.

The ECB holds a policy meeting on Thursday and will be under intense pressure to stimulate the economy. “We expect the opening statement, and Q&A, to have a distinctly dovish tone,” wrote analysts at RBC Capital Markets in a note to clients. “For now, we think that the Governing Council will refrain from any immediate action, but we expect the downbeat tone of next week’s meeting to lay the groundwork for a policy response over the next few months.”

The Bank of England holds it policy meeting on Thursday and is expected to stay on hold following a run of improving economic data recently. Another big event for markets will be Friday’s US payrolls report which is expected to show a modest rise of just 125,000 in October, amid some uncertainty about the impact of the government shutdown. A soft report, and particularly any rise in the jobless rate, would lean against the Fed tapering in December.

Also of note will be the US gross domestic product (GDP) due on Thursday, expected to show annualised growth of 1.9 per cent in the third quarter, down from 2.5 per cent the previous quarter.

All the talk of Fed tapering saw US Treasury yields rise for a third straight session on Friday. Yields on the benchmark 10-year US Treasury note jumped to 2.63 per cent, leaving behind the week’s low of 2.47 per cent.