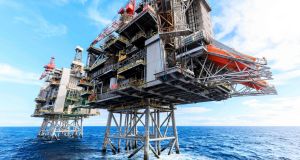 Oil prices fell to their lowest level in more than a year on Friday. Photograph: Getty

European shares closed the day higher in choppy trading on Friday but notched up their second straight week of losses as concerns about slowing global growth, weak earnings and a US-China trade war drove investors away from the region’s equities.

US stocks fell as oil prices plunged to their lowest in more than a year, dragging down energy shares, while the US-China worries kept investors on edge in a trading session truncated by Black Friday.

Bank of Ireland finished up 2.1 per cent at €5.83, as cautious optimism crept into the European banking sector over the future of Italy’s banks. AIB finished up almost 0.5 per cent at €3.75.

Agribusiness Origin Enterprises, which held its agm in Dublin on Friday, finished the session up 3.4 per cent at €6.00.

Mining stocks dropped to four-week lows, with Fresnillo at the bottom of the FTSE 100 at a 2½-year lows.

The oil index hit its lowest since April as the crude rout deepened, with Brent falling below $60 per barrel on continued concerns about a rising glut. Heavyweight Shell fell 3.8 per cent.

In contrast, the selling helped companies with exposure to fuel prices – EasyJet, Royal Mail and Ocado were top of the blue-chip leader board. Software firm Sage Group was up 2.9 per cent, recovering from three-year lows hit earlier in the week following its results.

Housebuilders and banks also clawed back some ground lost in recent weeks amid the Brexit turmoil – Persimmon was up 2.5 per cent and Lloyds Bank rose 2.1 per cent. The big moves among the mid- and small-cap companies were driven by M&A and earnings news.

Flybe shares took off after Sky News reported that Virgin Atlantic is in talks to buy the UK-listed regional airline a week after the company said it was in talks to sell itself. The stock ended up more than 70 per cent for a record daily gain.

The European oil and gas index sank 2.9 per cent to April lows as the crude rout deepened in afternoon trade. Airlines benefited from the continued sell-off with Lufthansa up 2.9 per cent and leading the Dax . Fuel makes up a significant portion of the sector’s costs.

Italy’s banks’ index climbed 1.3 per cent as bond yields slid, boosting lenders who have large sovereign bond portfolios. Generali rose 2.3 per cent, while Banca Mediolanum and Unicredit were up 2.1 per cent.

Renault shares rose 2.3 per cent after deputy chief executive Thierry Bollore said he would safeguard the carmaker’s interests in its alliance with Nissan, following the ousting of Carlos Ghosn as Nissan chairman over financial misconduct allegations.

Oil majors Exxon Mobil Corp and Chevron Corp fell more than 3 per cent and were the leading decliners on the Dow Jones Industrial Average. Oilfield service providers Schlumberger and Halliburton also fell nearly 3 per cent. That pressured the S&P energy index, which fell 3.4 per cent, the most among the 11 major S&P sectors. The energy sector has lost 16.5 per cent since the beginning of October, making it the worst performing S&P sector during the period and putting it on pace for its biggest two-month drop since September 2011.