Mark Paul and Joe Brennan look at how Brexit will affect the Irish economy. 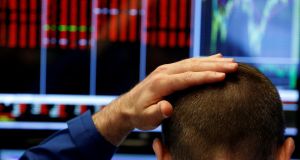 Currency markets were an initial focus of Brexit fallout, which soon spread across most assets. Photograph: Reuters

Global financial markets were rattled on Friday by the UK’s surprise move to quit the EU and as investors in Europe braced themselves ahead of a Spanish general election over the weekend.

Some €7 billion was wiped off the Irish market as the Iseq index ended the session down 7.7 per cent at 5,878, having plunged as much as 17 per cent earlier inthe day. Banks were among the worst performers as trading volumes in the Dublin were more than 500 per cent more than what is normally seen on the market.

“The markets were completely wrong-footed by the British vote,” said Eugene Kiernan, head of investment strategy at Appian Asset Management in Dublin. “However, the European market fared much worse than the FTSE in London in the end as investors worried about political contagion in light of the UK referendum.”

The Spanish market was among the biggest losers across Europe, closing down 12.4 per cent, as voters there prepared to take to the polls for a second general election in six months. Investors are worried that the UK vote may spur anti-establishment sentiment elsewhere.

The biggest focus as UK votes trickled in in the early hours of Friday morning was on currency markets.

The British currency initially soared to $1.50 on Thursday night, shortly after the polls closed, as a YouGov opinion poll suggested that 52 per cent of voters had decided to back the Remain camp. However, optimism quickly evaporated as polls started to trickle in overnight showing that the financial markets and bookmakers had gotten their forecasts wrong, sending the sterling down as much as 10 per cent at one stage, to $1.3229.

Sterling subsequently fell more than 10 per cent to $1.3229 - its lowest level since 1985 - as it became clear two-and-a-half hours before European markets opened that the Leave campaign had won. It has since rallied off its lows, reaching $1.3597 by the time European traders signed off.

Sterling and shares began to move off their lows after Bank of England’s governor, Mark Carney, said his institution was ready to pump billions of pounds into the financial system to support markets and wouldn’t hesitate to take further measures, if needed.

“While we saw a big knee-jerk reaction at the start of trading with indiscriminate selling across the board, investors became far more discerning as the day progressed,” said Aidan Donnelly, a senior equity analyst at Davy’s private clients division.

Bank of Ireland ended the day down 21 per cent at 19.8 cents, given that more than 40 per cent of the lender’s portfolio is in the UK. Permanent TSB, which is seeking to sell its UK mortgage book, plunged 17.5 per cent to €1.80.

“European equities - while down sharply - probably have a further 5 per cent or 6 per cent downside risk from these levels,” said Brian Devitt, a senior equities research analyst with Goodbody Stockbrokers, adding that he sees the market downgrading its earnings expectations for Eurpean companies in the near term.

Elsewhere, Ryanair dropped 9.8 per cent after Aer Lingus’s parent, IAG, warned within hours of the UK’s decision that the event will reduce its profit growth this year.

Ireland’s benchmark 10-year bonds have had a choppy session. The yield - or market interest rate - on the notes ended up 0.06 percentage points to almost 0.82 per cent as investors fretted about the impact of Brexit on the broader Irish economy. Investec analyst Philip O’Sullivan, for one, said he plans to take a red pen to his growth forecasts for Ireland in light of the UK’s historic decision.