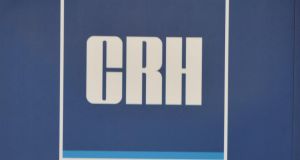 European stocks declined from a five-year high as investors weighed corporate earnings and China‘s pledge to boost the role of markets in economic growth.

The Irish stock market bucked the trend, with the Iseq rising by 0.62 per cent to close at 4,500.06. This is its highest level in more than five years.

DUBLIN
CRH was one of the main gainers of the day, with shares up 2.6 per cent at €19.05. In a trading update, the company, which has switched its primary listing to London, said it was carrying out a review of the group with the intention of disposing of non-core assets to maximise growth and shareholder returns. Further details will be provided in February next year.

Its full-year earnings guidance was in line with previous statements.

Resource stocks were down almost across the board. Kenmare Resources was the biggest loser, down 6.8 per cent at 24.5 cent. Aminex, Ormonde Mining, Petroceltic, Providence Resources and Tullow Oil also closed lower.

Glaxo was the biggest drag on the FTSE 100 after a coronary heart disease treatment failed to meet the goal of a late-stage study.

Countrywide fell 1.5 per cent as its second-largest shareholder sold a 10.2 percent stake.

CRH jumped to the highest price in more than three years after the Irish construction company said it may sell further assets.

TalkTalk rallied the most in a year after raising its sales-growth forecast.

The gauge has still soared 14 per cent this year as the Federal Reserve maintained stimulus measures.

EUROPE
Norsk Hydro ASA dropped the most since 2011 after Vale SA sold a stake in the aluminium maker. Infineon Technologies AG lost 5.6 per cent as Europe‘s second-largest semiconductor maker predicted a decline in profitability for its first quarter.

The Stoxx Europe 600 Index fell 0.6 per cent to 321.68. The gauge has rallied for five straight weeks as the European Central Bank lowered its key interest rate and the Federal Reserve maintained bond purchases.

China‘s top policymakers affirmed that markets must play a decisive role in the allocation of economic resources, as the central committee of the Communist Party of China concluded its first plenary session under the presidency of Xi Jinping, the official Xinhua News Agency reported.

Yesterday‘s comments build on China‘s pledge to reduce the role of the State in economic activity and boost private participation as the world’s second-largest economy tries to replace debt-driven growth with consumption-led expansion.

US
NRG Energy slipped 4 per cent after the generator lowered its 2013 earnings target.

News Corp dropped 1.2 per cent as the publisher of the Wall Street Journal reported a decline in revenue.