Irish market down on profit taking 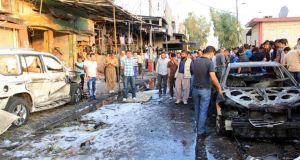 European stocks fell sharply as violence in the Middle East escalated and a report showed the US economy shrank in the first quarter by the most since the depths of the last recession.

The data showed US gross domestic product (gdp) contracted at a 2.9 per cent annualised rate in the first quarter, more than forecast and the worst reading since the same three months in 2009.

Traders said there was an element of profit-taking in yesterday’s slip but pointed out that the markets had lost momentum. DUBLIN The Irish market fell alongside its European peers with traders in Dublin blaming profit taking for much of the fall.

Packaging group, Smurfit Kappa, was flat at €16.80, but traders pointed out that most of its rivals were weak, shedding up to 1 per cent in some cases.

Ryanair, which is dealing with the fall out from the French air traffic controllers’ strike, dipped 0.36 per cent to €6.88.

Bank of Ireland gained 2.83 per cent to end the day at 25.4 cent on the back of buy recommendations from Morgan Stanley and Macquarrie.

Explorer Dragon Oil climbed 1.64 per cent to €7.607 after reporting that it expects production from its Caspian Sea fields to rise to around 90,000 barrels a-day by the end of the year. LONDON Miners and oil companies were badly hit in London. Irish-based explorer, Tullow Oil, retreated 2.8 per cent to 846.5 pence. Anglo American, the owner of the world’s largest platinum mine, fell 2 per cent to 1,427.5 pence. Antofagasta, the copper producer controlled by Chile’s Luksic family, retreated 2.1 per cent to 762.5 pence.

One of the few to buck the trend was another Irish-based company, titanium miner Kenmare Resources, which climbed 9.09 per cent to close at 12 pence.

Bunzl fell 1.8 per cent to 1,600 pence. The distributor of disposable tableware and food packaging said it bought Allshoes Benelux in the Netherlands and JPLUS Comercio e Distribuicao Ltda in Brazil. Bunzl also reported that first-half revenue climbed 6 per cent at a constant foreign-exchange rate. EUROPE GDF Suez retreated 2.3 per cent to €20.33. The French government sold 3.1 per cent of the company, trimming its holding to 33.6 per cent, as it seeks to raise funds to purchase a stake in infrastructure group, Alstom. The shares were priced at €20.18 each, the bottom of a proposed range, according to two sources.

Alstom climbed 0.7 per cent to €26.97. Under an agreement announced on June 22nd, the French government will buy as much as 20 per cent of Alstom from construction giant, Bouygues, allowing General Electric to overcome a last hurdle for its $17 billion purchase of Alstom’s energy assets.

Aker Solutions slumped 5.5 per cent to 106.40 kroner. Banca Monte dei Paschi di Siena tumbled 20 per cent to €1.50 for a third day of losses. United Internet sank 6.6 per cent to €32.80. Banco Comercial Portugues rallied 14 per cent to 18 cents. Portugal’s second-biggest publicly traded lender said it will issue shares to repay €1.85 billion of state-subscribed hybrid capital instruments. It intends to reimburse the outstanding €750 million by 2016, a year ahead of its schedule.

Metro climbed 1.5 per cent to €31.67, the highest price in four months. JPMorgan Chase boosted Germany’s largest retailer to neutral from underweight, meaning that it no longer recommends selling the stock.

Metro may be able to start a planned initial public offering for its Russian unit in the fall amid increased investor demand for the country’s equities and a rebound in the ruble, according to JPMorgan. – (Additional reporting: Bloomberg, Reuters)

1 Who are Ireland’s 17 billionaires?
2 Fianna Fáil may have just pressed the pause button on the property market
3 Are there annual limits on inheritances or gifts to a child?
4 My father in a nursing home wants to gift me his house
5 Prime Dublin 4 apartment portfolio for €8m
6 Countries that fail to attract immigrants will lose out – Microsoft chief
7 O’Flynn company ‘mistakenly’ got go-ahead for Birmingham project
8 State subsidises public sector retirees to cover gap until State pension
9 Geodis Ireland takes 185,000sq ft at Dublin Airport Logistics Park
10 Profits rise at BMW’s Irish operation despite drop in demand
Real news has value SUBSCRIBE