Bank of Ireland’s good run continues with stock finishing 0.7% ahead at 30 cent 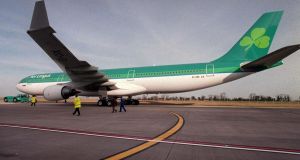 Aer Lingus and Ryanair had contrasting days. While Aer Lingus rose by 0.6 per cent to €1.409, Ryanair closed down 2.3 per cent at €6.60 on profit taking. Photograph: Alan Betson

European stocks posted a gain in the first full week of 2014, as data showed US and German unemployment fell and that Ireland returned to the bond market after exiting its bailout programme.

A gauge of lenders posted its biggest weekly advance in more than eight months as Ireland’s bond sale sent European borrowing costs lower, with Bank of Ireland soaring 19 per cent in Dublin.

The Stoxx 600 climbed 0.7 per cent to 329.95, its highest level since May 2008, in the week. The gauge rose 17 per cent in 2013, its best year since 2009, as the European Central Bank said it would keep interest rates low for an extended period and investors bet that the US economic recovery is strong enough to withstand a reduction in Federal Reserve stimulus.

National benchmark indexes rose in all of the 18 western-European markets except Iceland this week. The FTSE 100 gained 0.1 per cent, Germany’s DAX advanced 0.4 per cent, while France’s CAC-40 increased 0.1 per cent. Spain’s IBEX 35 rallied 5 per cent to its highest level since July 2011.

Ireland’s Iseq Index lost 0.3 per cent, paring its gain for the week to 3.2 per cent.

DUBLIN
Tullow Oil jumped 6.7 per cent in Dublin on speculation that Norway’s Statoil may be eyeing it as a bid target.

“In these oil firms, you have to take some of the takeover talk with a pinch of salt, but there has been a lack of M&A speculation recently, so investors who are looking around for that sort of activity will jump on it,” Toby Morris, sales trader at CMC Markets, said.

Drinks group C&C rose by 0.7 per cent. The company is due to issue a market update next week and stockbroker Davy said it expects an operating profit for the current year to the end of February 2014 of €127.1 million, broadly in line with consensus.

Airlines Aer Lingus and Ryanair had contrasting days. While Aer Lingus rose by 0.6 per cent to €1.409, Ryanair closed down 2.3 per cent at €6.60 on profit taking.

Bank of Ireland’s good run continued with the stock finishing 0.7 per cent ahead at 30 cent. On Wednesday, the bank launched a successful €750 million five-year senior unsecured fixed rate transaction.

CRH closed down 0.8 per cent at €19.48 having been downgraded by a couple of brokers this week.

LONDON
UK stocks climbed, posting their biggest rally this year, as a report showing a slowdown in US job creation bolstered speculation that the Federal Reserve won’t rush to slow its bond-buying programme.

IMI advanced 2.3 per cent as Bank of America upgraded its rating on the stock.

Celesio advanced 5.7 per cent after McKesson raised its bid for the German drug distributor.

NEW YORK
US stocks fell, extending this year’s decline for the Standard & Poor’s 500 Index, as data showed payrolls in December increased at the slowest pace since January 2011.

Alcoa dropped 4.9 per cent after profit missed analysts’ estimates. Sears Holdings plunged 11 per cent as it forecast a fourth-quarter loss and said sales during the holiday period dropped.

Companies that pay the highest dividends such as utility and phone stocks advanced as bond yields slipped, boosting the allure of equity income. – Additional reporting by Bloomberg and Reuters