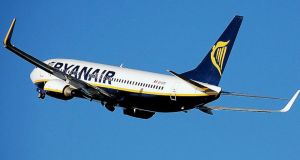 Ryanair and Aer Lingus were dragged down in a sector-wide slide in airline stock linked to Germany’s Lufthansa lowering of its profit forecast earlier in the week.

European stocks were little changed yesterday despite poor retail sales and jobs data from the US, while oil prices hit a three-month peak on escalating violence in Iraq.

DUBLIN The main mover on the Iseq was Clonmel-based drinks maker C&C, which closed the day 6 per cent up at €4.85. This was predicated on rumours it may be the acquisition target of one of the big international brewers like Inbev or SABMiller, and ongoing speculation it may soon seek a listing in the UK.

Agronomy services group Origin Enterprises also performed well, closing just under 4 per cent up at €8.35 on the back of a revaluation of its target price by Goodbody Stockbrokers.

Aer Lingus and Ryanair were again dragged down in a sector-wide slide in airline stock linked to Germany’s Lufthansa lowering of its profit forecast earlier in the week. Aer Lingus closed the day down 3 per cent at €1.44, while Ryanair shed 2 per cent to finish at €7.31.

Packaging group Smurfit Kappa had a mixed day, initially falling on fears over weaker prices for paper grades. However, when these fears failed to materialise its shares rose again, ending the day unchanged at €17.6.

Bank of Ireland saw a reasonable volume of trading but closed the day flat at 26.6, practically the same level at which Wilbur Ross sold his 1.8 billion shares earlier in the week.

LONDON Energy companies kept Britain’s top share index out of the red yesterday as oil prices were lifted by violence in Iraq.

But the FTSE struggled to make any real headway as heavyweight mining stocks dropped sharply after fears about declining Chinese demand sent copper prices to a one-month low.

BG, which does not have a presence in Iraq, rose 2.5 per cent, while BP and Royal Dutch Shell, which are in Iraq, added 0.7 per cent and 0.5 per cent, respectively. Companies dealing in basic materials, however, knocked 10.8 points off the FTSE. Miners Rio Tinto and Anglo American were each down over 3 per cent.

Iliad rose 6.3 per cent and Bouygues advanced 5.2 per cent on expectations of more consolidation among French telecom companies.

French economy minister Arnaud Montebourg said the government still wants to reduce the number of mobile telecom operators in France to three from four, to end the “destructive spiral” of falling prices.

Gains by some shares were offset by a decline in mining shares related to concerns about the global outlook. NEW YORK US stocks fell in early trading after a round of disappointing economic data on the consumer and labour market, though energy shares were sharply higher as the price of crude oil spiked.

Retail sales rose 0.3 per cent in May, half of the growth rate that had been forecast, while the number of Americans filing new claims for unemployment benefits unexpectedly rose last week.

Geron Corp was one of the Nasdaq’s most active movers, jumping 23 per cent to $3.20 on heavy volume after the US Food and Drug Administration lifted a partial clinical hold on a study testing its blood cancer drug. Lululemon Athletica fell 14.8 per cent to $37.75 on heavy volume. – (Additional reporting by Reuters and Bloomberg)

8 Chris Johns: If this is to be the last lockdown it must work