Iseq underperforms the major indices, while sentiment later unravels in US trading 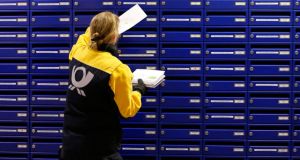 German postal and logistics group Deutsche Post gained 2.2 per cent to €23.75 after reporting a 5.7 per cent increase in quarterly profit. Photograph: Reuters/Fabrizio Bensch

European stocks made a modest rebound after four days of losses, as companies including Credit Agricole and Deutsche Post reported better-than-expected earnings.

Sentiment was kept in check by a Markit economics report that showed the euro-zone services sector expanded less in July than initially estimated.

Stocks also trimmed their gains in afternoon trading after Markit published a better-than- expected report on the US services sector, reviving speculation that the Fed could start raising interest rates earlier than previously thought. This in turn sent US stocks into reverse in early trading.

The Iseq underperformed the major European markets, slipping 0.2 per cent and extending its losses from recent sessions. Among the major stocks, food group Kerry fell further, losing 1.3 per cent to close at €53.90, while Ryanair dropped 0.4 per cent to €6.73. Building materials group CRH was more or less flat at €17.25.

Paper and packaging group Smurfit Kappa went against the sluggish mood, climbing 2.4 per cent to €16.61 in a continuation of yesterday’s gains, while Aer Lingus added more than 1 per cent to close at €1.34.

However, Kingspan fell back, with the insulation-maker finishing the day at €12.02, down 2.8 per cent. The Green Real Estate Investment Trust (Reit) also lost ground, closing down 1 per cent at €1.21.

The FTSE 100 edged forward 0.1 per cent, with the blue-chip index’s gain supported by climbs for engineering group Weir and quality-control and safety-services company Intertek.

Weir rose 2 per cent, the biggest FTSE gain in percentage terms. The company ended its corporate broker agreement with Bank of America Merrill Lynch yesterday, suggesting it may be targeted by bigger rivals for a takeover.

Intertek rose 1.8 per cent after analysts at Numis raised their rating on the company to “add” from “hold.” Aggreko rose 1.1 per cent to 1,740 pence. The supplier of mobile power generators posted first-half sales of £768 million, beating analysts’ forecasts.

However, Meggitt slid 4.7 per cent to 479.7 pence after the supplier of aircraft wheels and brakes said first-half pre- tax profit fell 21 per cent, to £143.8 million.

National benchmark indexes advanced in nine of the 18 western European markets, with France’s CAC 40 and Germany’s Dax both adding 0.4 per cent.

Deutsche Post gained 2.2 per cent to €23.75 after reporting a 5.7 per cent increase in quarterly profit.

Telefónica fell 1.7 per cent to €11.79 after saying it offered €6.7 billion for a Vivendi unit. The Spanish telecommunications company said it had offered to buy Vivendi’s Brazilian internet-provider unit GVT. Vivendi added 3.6 per cent to €19.59.

German builder Bilfinger plummeted 9.7 per cent to €55.03 after it lowered its profit forecast for the second time in five weeks.

Stocks fell as energy shares declined and concern increased over escalating tensions in Ukraine. Early losses influenced by Federal Reserve-related speculation were extended in the afternoon after Poland’s foreign minister said Russian units are poised to put pressure on or invade Ukraine.

Target lost 3.9 per cent after second-quarter profit trailed its forecast as US sales remained weak and its Canadian operations continued to struggle.

Motorola slipped 5.1 per cent as quarterly earnings fell short of estimates, while Halliburton fell 3.8 per cent. All 10 major industries in the S&P 500 were in decline by lunchtime in New York, with energy shares tumbling 2.3 per cent. – Additional reporting: Bloomberg / Reuters

Ryanain says Cork and Shannon closures ‘could have been avoided’