European stocks edge up to near four-month highs 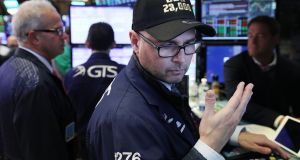 A trader on the floor of the New York Stock Exchange. Photograph: Spencer Platt/Getty Images

European stocks edged up to near four-month highs with a raft of company results in focus while euro zone bond yields rose from five-week lows as investors geared up for a key European Central Bank policy meeting next week.

The start of China’s Communist Party conference, the extension of talks over the North American Free Trade Agreement and uncertainty over the Catalonia crisis in Spain also gave investors something to chew on without reducing risky appetite.

“We need much more clarity on monetary policy: we have the ECB coming up next and we have some issues with the Fed. That’s where the market focus is going to be,” Peter Rosenstreich, head of market strategy at Swissquote Bank in Geneva said.

The Iseq underperformed its peers, closing down 11 points at 6,773, as the emerging tracker mortgage scandal blew cold winds across the banking sector here. Taoiseach Leo Varadkar’s threat to raise the bank levy appears to have triggered the slide.

Worst-hit was Permanent TSB, which closed down 1.6 per cent at €1.96, while rival Bank of Ireland fell 0.7 per cent to €6.81. AIB bucked the trend to close up 0.6 per cent at €5.09, albeit it had been trading significantly higher before Mr Varadkar’s comments.

Donegal Investment Group, which runs Donegal Creameries, rose 15 per cent to €7.20 after a court ruling placed a greater value on its stake in Monaghan mushrooms.

Elsewhere, Ryanair underperformed Europe’s airline sector, trading down 1 per cent at €16.35, while Cairn Homes rose 1 per cent to €1.74, having lost ground last week on foot of rival Glenveagh’s IPO.

London’s top-flight index edged towards record territory on Wednesday as blue-chip stocks enjoyed a leg up from the weak pound. The FTSE 100 Index closed up 26.7 points to 7,542.87 – 13.4 points shy of last Thursday’s all-time closing high of 7,556.24 – as Pearson delivered a strong session after hiking its annual earnings targets on Tuesday.

Shares in the education group rose 20p to 687p, making it the biggest riser on the London market and helping offset a dismal performance by Reckitt Benckiser after it warned over sales for the second time in three months.

On the second tier, the FTSE 250 Index scraped an all-time closing high, rising 128.82 points to 20,259.77, marginally beating a record of 20,259.51 set on Friday. Supermarket giant Sainsbury also closed down 1.4p to 246.3p, as investors digested Tuesday’s announcement that it would cut around 2,000 payroll and human resources jobs across the business.

Across Europe, Germany’s Dax and the Cac 40 in France both climbed 0.4 per cent higher. Dutch chemicals group Akzo Nobel posted its third-quarter results, with the company anticipating positive developments for the Emea and North America going forward. However, it added that “headwinds” are expected to continue. Its shares were down 1.84 per cent.

The Dow Jones Industrial Average stayed above the 23,000-mark in late morning trading on Wednesday with solid support from IBM, which reported strong earnings.

Shares of IBM surged 9 per cent and accounted for nearly 92 of the 136 point gain in the blue-chip index, after the company signalled it was back on growth path. The Dow had briefly surpassed the all-time peak on Tuesday but closed 3 points short of the record level. The latest 1,000-point increase was covered in roughly half the time it took the index to move from 21,000 to 22,000.

Chipotle Mexican Grill slipped 1.85 per cent after Bank of America Merrill downgraded the company’s stock to “underperform” and slashed its price target by $105 to $285.