European shares fall on poor figures from France and Germany 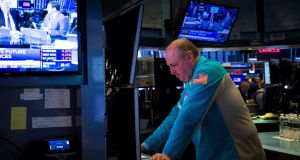 US stocks were mixed in early trade on the NYSE as investors digested poor European data and news that UK travel agent Thomas Cook had gone to the wall. Photograph: Michael Nagle/EPA

Poor French and German economic data and mixed signals from US-China trade sparked a fall in European shares on Monday.

Irish banks took a drubbing as investors swerved the sector generally. AIB was down 3.47 per cent at €2.558, hitting a low of €2.498 during mid-morning trade.

Ryanair was one of those that benefited from news that British travel agent Thomas Cook had finally gone under after efforts to rescue the ailing business failed at the weekend.

Dealers said investors gravitated towards Ryanair and other airlines in the wake of Thomas Cook’s failure as they believed the carrier would benefit from the closure of the British travel agent’s own airline.

Among other of the market’s heavyweights, international packaging group Smurfit Kappa was down 2.38 per cent at €27.10. Cement maker CRH shed 1.35 per cent to €4.90.

In other sectors, hotel group Dalata fell 3.16 per cent to 91.6 cent. Dealers suggested that this may reflect fears for tourism generally in the wake of the Thomas Cook liquidation.

Dealers said investors believed that the failure of the travel company would benefit the likes of EasyJet as it would cut the number of seats available, forcing consumers to pay more for flights. EasyJet also plans launching its own holiday business. Thus, Thomas Cook’s failure takes one likely competitor off the pitch, dealers said.

However, Aer Lingus owner International Consolidated Airlines Group did not benefit. Its stock dipped 1.36 per cent to 471.3p.

Irish-based fuel and technology distributor DCC rose 0.43 per cent to 7,004p. Miner Glencore fell 2.92 per cent 249.05p, while rival Antofagasta shed 2.56 per cent to 884.2p as a lack of clarity on US-China trade talks weighed on metals prices.

European shares fell sharply on Monday. The pan-European Stoxx 600, which covers leading shares across 18 markets, was down 0.8 per cent as poor data left investors fearing an economic downturn.

Banks were among the worst hit, followed by manufacturers. Germany’s Commerzbank led the way down, tumbling 7.46 per cent to €5.30. French car maker Peugeot was down 4.08 per cent at €23.04.

Steelmaker Arcelor Mittal fell 5.93 per cent to €13.012 on the Amsterdam market.

German private-sector activity shrank for the first time in 6½ years in September, survey data showed, as a manufacturing recession deepened unexpectedly and growth in the service sector lost momentum.

Markit’s flash reading of composite German PMI (purchasing managers’ index) came in at 49.1 in September, down from 51.7 in the previous month. The news spooked euro-zone investors who opted for bonds over shares on Monday.

US stocks were mixed in early trade as investors digested poor European data and news that one of the world’s oldest travel companies had gone to the wall.