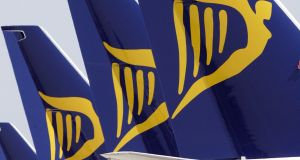 Ryanair: airline closed down nearly 1 per cent to €13.30 as the stock continued to be affected by lower oil prices. Photograph: Alan Betson

European stocks fell for the fourth time in six days on Thursday led by declines in banks and carmakers.

Already the worst performers among industry groups this year, lenders extended their declines to a February low, dragged down by those in Italy. Fiat Chrysler led carmakers lower, falling 3.9 per cent after indefinitely laying off 1,300 employees at a Michigan factory.

Banks declined 2 per cent amid talk of more layoffs and cutbacks planned by Europe’s major lenders as they struggle with zero rates. The ECB’s willingness to ease monetary policy further also soured sentiment.

Airlines across Europe performed badly. Ryanair closed down nearly 1 per cent to €13.30 as the stock continued to be affected by lower oil prices, the departure of Air France-KLM chief executive Alexandre de Juniac and disappointing passenger figures from rival EasyJet earlier in the week.

Hotel group Dalata, whose shares rose sharply earlier in the week, edged lower on Thursday, closing down 3 per cent to €4.65. Other movers included Kerry Group, down 1 per cent to €82.98 and Fyffes, which closed 2 per cent lower at €1.48.

Marks & Spencer rose 3 per cent in strong volumes of 228.8 per cent of its 90-day average, after it posted a decline in sales that was less severe than expected.

Sainsbury also rose, up 2.7 per cent after being upgraded to “outperform” from “underperform” by Credit Suisse, which said the food retail sector was a recovery story and that the grocer’s bid for Argos owner Home Retail was “financially and strategically inspired”.

Worldpay also fell, down 2.9 per cent to 274.7p, after a top shareholder in the payment processor sold part of its stake for 269p.

Healthcare stocks advanced for a second session, with the sector index rising 0.5 per cent after the termination of the Pfizer-Allergan merger deal fueled talk of other consolidation activity in the sector. Shire rose 0.8 per cent after saying it expected its deal to buy American drugmaker Baxalta to proceed as expected, while elsewhere in the sector Roche also gained 0.7 per cent and Astrazeneca advanced 1.2 per cent.

Randgold Resources rose 3.2 per cent to 6,595 pence, the top gainer in the pan-European FTSEurofirst 300 index, as gold prices jumped on a weaker dollar.