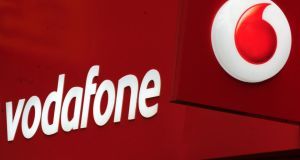 The Stoxx Europe 600 Index rose 0.4 per cent, with Vodafone Group contributing the most to the gain

European stocks climbed after posting their biggest weekly gain this year, led by increases in property, mining and telecommunications companies.

With the US stock market closed for Presidents Day and much of the UK on midterm break, it was a relatively quiet day on the main exchanges.

National benchmark indexes advanced in 12 of the 18 western-European markets. France’s CAC 40 slipped 0.1 per cent and Germany’s Dax was little changed, falling less than 0.1 per cent. The FTSE 100 rallied 1.1 per cent.

Bank of Ireland continued its impressive run of late with sentiment remaining positive on the back of a perceived recovery in Ireland’s economic fortunes. It closed up 3.3 per cent to 34 cent.

Construction-related stocks performed well across Europe and CRH was no exception rising 2.2 per cent to €20.08.

Hibernian Reit ’s announcement that it is to acquire a portfolio of residential real estate loans from Ulster Bank for €67 million met with mixed reaction from investors. The property investment firm’s share price rose shortly after the news was announced but tailed off again soon after to close up 1.8 per cent to €1.10.

One analyst said that while there had been concerns as to whether the firm would ever get round to spending money, there was surprise over the fund’s decision to buy a portfolio of loands rather than of properties.

Green REIT’s stock was up as high as Hibernian as speculation mounts over whether it intends to raise money here shortly. It closed up 1.6 per cent to €1.29.

The FTSE 100 Index outpaced most other European markets after a strong session boosted by property and commodity-based stocks.

The performance reflected relief at a bigger-than-expected rebound in lending figures in China, easing worries fuelled by recent cooler retail sales and manufacturing growth figures for the country.

Mining stocks played a big part in London’s impressive rally, with Anglo American up 2 per cent or 32.5 pence to 1552 pence and Randgold Resouces 83 pence higher at 4857 pence after another upward session for the price of gold.

Property firm Hammerson , whose portfolio of 20 shopping centres in the UK and France includes the Bullring in Birmingham, led the FTSE 100 risers board after it reported a better-than-expected 2.1 per cent gain in net rental income for 2013.

The company also reported a 5.7 per cent rise in its net asset value per share - one of key benchmarks for the industry.

The Stoxx Europe 600 Index rose 0.4 per cent, with Vodafone Group contributing the most to the gain.

Essar Energy Essar Energy Plc increased 3.3 per cent to 68.2 pence. The Indian power producer and oil refiner said it has formed an independent committee to consider a takeover proposal by Essar Global Fund Ltd . EGFL, which owns 78 perc ent of Essar Energy, may offer 70 pence a share for the stock it doesn’t already own and 80 cents apiece for convertible bonds, according to a statement.