European shares bounce on back of ECB comments 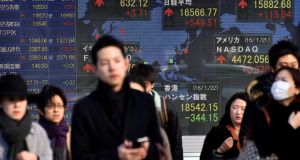 The pan-European FTSEurofirst 300 was up 1.9 per cent at 1,318.99 points. The index gained 2.1 per cent on Thursday after ECB head Mario Draghi said financial markets turmoil and concerns over China will prompt a March review of the bank’s monetary policy.

Oil stocks and miners were the top sectoral gainers with a rise of 4.1 percent and 3.2 percent respectively.

Philips fell 0.9 per cent after a $3.3 billion deal to sell its components business to a consortium of Asian buyers broke down over U.S. national security objections.

Earlier Chinese stocks trading in Hong Kong rebounded from a six-year low, as energy producers rallied after oil prices increased and the government signaled it will curb overcapacity in industries such as coal that have been dragging down economic growth.

The Hang Seng China Enterprises Index rose 1.8 per cent at the noon break. PetroChina and China Shenhua Energy, the biggest Chinese oil and coal producers, surged more than 3 per cent.

Premier Li Keqiang called for supply-side reforms in the steel and coal industries, while the Economic Information Daily reported the government will provide 100 billion yuan (€14 billion) a year to help reduce capacity in those sectors. The Shanghai Composite Index slid 0.3 per cent, led by drugmakers.

Chinese stocks in Hong Kong are tracking gains in global equities after the European Central Bank signaled it may boost stimulus and crude oil nudged $30 a barrel. There’s speculation the Chinese government will continue to prop up mainland equities after vice president Li Yuanchao’s comments, according to IG Asia Pte.

China is willing to keep intervening in the stock market to make sure a few speculators don’t benefit at the expense of regular investors, Mr Li said in an interview at the World Economic Forum in Davos, Switzerland. “The early rebound in Chinese markets might be due to improved global sentiments, riding on the back of oil recovery and additional ECB stimulus,” said Bernard Aw, a strategist at IG Asia in Singapore.

“Moreover, China’s vice president has commented that Beijing would keep intervening in the stock markets to curb volatility, which could be interpreted that the ‘National Team’ will maintain their presence, supporting stock prices.” The Shanghai Composite and Hang Seng China indexes have fallen at least 17 percent this year, making them the worst- performing global benchmark measures out of the 93 tracked by Bloomberg.

Concern about the government’s ability to manage the economy and yuan volatility have contributed to the losses, along with a steep decline in leverage. Margin debt in Shanghai dropped for a 15th day on Thursday toÂ 578 billion yuan ($88 billion), the longest losing streak since the exchange began compiling the data in 2010.

The sell-off is a setback for President Xi Jinping’s government, which has been intervening to support both stocks and the yuan after the worst start to a year for mainland markets in at least two decades.

As policy makers in Beijing fight to prevent a vicious cycle of capital outflows and a weakening currency, the resulting financial-market volatility has heightened concern that the deepest economic slowdown since 1990 will worsen.

More than $840 billion exited the country in the first 11 months of last year in an unprecedented exodus, according to a Bloomberg gauge.