Virgin America soars in US as CRH, Smurfit Kappa, Ryanair and FBD fall in Dublin 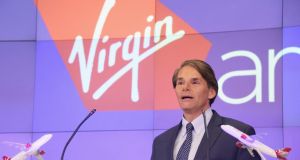 Eurostat, the EU’s official number cruncher, released figures showing the euro zone economy grew by 0.2 per cent in the third quarter of the year, while that of all 28 states in the union grew 0.3 per cent.

Index heavyweight building materials group CRH slid 1.65 per cent to €17 on the back of general weakness across its sector in Europe.

Dealers noted that volumes in all three big-name stocks were thinner than usual.

Bank of Ireland claimed 1.05 per cent to close at 28.8 cent. Insurer FBD, which saw more than €100 million wiped off its value this week after warning that a “challengiing claims environment” would leave it with an operating loss for 2014, was down 0.79 per cent at €10.715.

The stock tested lows of €10.66 in the morning, a 1.3 per cent slide, but recovered all of that ground before dipping again in the afternoon. Dealers said the recent floods had left investors nervous of insurers as they anticipated they would result in further bad news on the claims front.

Real estate trusts Green and Hibernia are due to issue updates next week. Green was down 0.79 per cent at €1.28 while its rival Hibernia barely budged, shedding just 0.09 per cent to €1.085.

Irish-based Tullow Oil, which this week signalled an intention to rein in exploration spending in the face of falling oil prices, was more or less flat, ending the day just 0.04 per cent down at 463.8 pence.

SBM Offshore slid 3.9 per cent to €11.55 over concern that an investigation into allegations that it bribed Brazilian officials to get work may prevent it from competing for contracts with state-controlled Petroleo Brasileiro.

Nokia Oyj fell 5.5 per cent to €6.28. The Finnish company’s increased earnings target failed to convince investors seeking support for a stock that has gained about 28 per cent since a low in February.

Baker Hughes gained 0.3 per cent to $58.90. The oilfield services company said it was in preliminary merger talks with larger rival Halliburton, which was little changed at $53.75.

Virgin America, a low-cost airline partly owned by Richard Branson, soared as much as 28 per cent in its market debut, underscoring the buoyant mood in an industry that is seeing relief from lower oil prices. Shares were last up 27.5 percent to $29.33.