On currency markets, sterling was boosted by a sharp fall in the unemployment rate from 7.6% to 7.4% 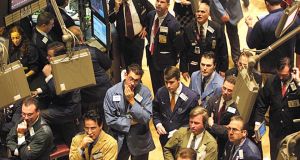 Traders on the floor of the New York Stock Exchange wait for the Federal Reserve’s decision in relation to its economic stimulus programme. Photograph: David Karp

In the UK, new data on how many shoppers were making their way to discount stores hit retail stocks.

In Dublin the Iseq of Irish shares closed at 4,388, a fall of 0.47 per cent, which put it behind its European peers.

DUBLIN
Oil exploration group Tullow adjusted downwards expectations for its its Paon-2A well off the Ivory Coast after hitting wet sands. The company said the total hydrocarbon column of the field was now only 700 metres.

“The well did not encounter oil at this location, reducing the upside volume potential associated with the Autruche field,” Angus McCoss, exploration director at Tullow said in a statement. The stock closed at €9.93, a rise of 1.38 per cent.

Fastnet, the ESM-listed oil and gas company, said it has completed a farm-out of its Foum Assaka prospect off the Moroccan coast in a deal worth $30 million. The stock closed at €0.15, a fall of 8.82 per cent.

The Irish Takeover Panel (ITP) has set a deadline for Canada’s Almonty Industries to make a formal offer for ESM-listed Ormonde Mining. The stock closed at €0.05, unchanged on the day.

LONDON
Marks & Spencer endured a poor pre-Christmas session as retail stocks were hit by investor worries over the scale of festive discounting.

The department store chain fell by 2 per cent, while the UK’s three major listed supermarket businesses were also under pressure – led by Sainsbury’s at the top of the fallers’ board.

The FTSE 100 Index went sideways, edging just 5.9 points ahead to 6492.1 following a topsy-turvy start to the last full week of trading before the break. On currency markets, sterling was boosted by a sharp fall in the unemployment rate from 7.6 per cent to 7.4 per cent. It climbed a cent against the greenback to $1.64 and a cent against the euro to €1.19.

In London, Centrica was among the risers on the FTSE 100 after it offered a pre-Christmas gift to shareholders following the sale of its Texas gas-fired power stations to private equity firm Blackstone for $685 million (£420 million).

Shares rose 5.6p to 328.7p as the British Gas owner said it will return the proceeds to investors through an extension of its share repurchase programme.

EUROPE
European stocks rose, rebounding from Tuesday’s decline, as investors waited for the Federal Reserve to decide whether to reduce its monthly asset purchases. France‘s CAC 40 added 1 per cent and Germany‘s DAX jumped 1.1 per cent.

TUI gained 3.8 per cent to €11.68 as Europe’s biggest tour operator posted net income of €4.3 million for the financial year ended on September 30th.

Electrolux AB rose 3.5 per cent to 159.50 kronor as UBS AG upgraded the home-appliances maker to buy from neutral. Vestas Wind Systems A/S climbed 5.3 per cent to 153 kroner after saying it received an order from Enel Green Power SpA for wind turbines to produce 350 megawatts of power.

NEW YORK
US stocks fell, after the fifth drop in six days for the S&P‘s 500 Index, before Federal Reserve policy makers announce whether they will slow the pace of their monthly bond-buying programme. Jabil plunged 21 per cent to $15.61. Apple dropped 2.6 per cent to $540.56. Citigroup analyst Glen Yeung said Jabil‘s forecast could be indicative of a steeper fall-off in iPhone production compared with last year, suggesting a risk to the company’s estimate for shipments of 38 million phones in Apple‘s second quarter. – (Additional reporting PA, Bloomberg)