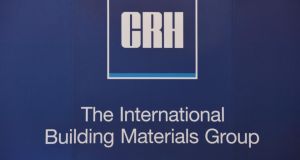 The building materials giant gained 3.5 per cent to close at €19.57. Photograph: Alan Betson

Analysts said that the rebound, which saw Dublin outperform its peers, indicated that the slide was not permanent. Good economic news helped to buoy investors.

In the UK, the National Statistics Office said gross domestic product expanded 0.7 percent in its initial estimate for the final three months of 2013. That completes the first full year since 2007 when the economy expanded in every quarter.

DUBLIN
Strong performances by index heavyweight CRH and Bank of Ireland ensured the Irish market outperformed its peers in Europe. Both contributed 59 points out of the 80 added by the Iseq index of Irish shares, with building materials group CRH accounting for 38 and BofI adding 21 points.

The building materials giant gained 3.5 per cent to close at €19.57, rebounding strongly from the previous day’s fall. Analysts at JP Morgan produced a note just after the close recommending it as a buy.

Bank of Ireland climbed 5.9 per cent to 28.9 cent as investors got behind the stock once again.

LONDON
BHP Billiton rose 1.4 per cent to 1,804 pence and Rio Tinto climbed 2.3 per cent to 3,213.5 pence as mining stocks performed well across Europe on the back of positive assessments from brokers.

Afren rose 4.1 per cent to 150.9 pence, halting a five- day decline that sent the shares to their lowest in three months. The oil and gas explorer said total sales probably rose to $1.65 billion in 2013 from $1.5 billion in 2012, more than the $1.62 billion that analysts projected. Afren reports its full-year results on March 27th.

F&C Asset Management jumped 6.1 per cent to 123.5 pence, its highest price since 2008. Bank of Montreal will pay 120 pence a share in cash for the money manager, the two companies said in a joint statement. F&C’s shareholders will also receive a dividend of 2 pence a share.

EUROPE
Santander climbed 1.6 per cent to €6.37. The shares lost 5.3 per cent in the three days through yesterday as emerging-market currencies from the Argentinian peso to the Brazilian real weakened. Banco Bilbao Vizcaya Argentaria SA, which relied on South America for 24 per cent of its sales in 2012, rose 1.6 per cent to €8.79.

Siemens AG rose 1.6 per cent to €98.94 as Europe’s largest engineering company said income from continuing operations in the first quarter of its financial year jumped 21 per cent to €1.39 billion . The average estimate of analysts had called for €1.33 billion.

Software AG rallied 7.2 per cent to €27.50 after the German company forecast that earnings before interest and taxes may increase by as much as 10 per cent in 2014 from last year’s €260.7 million .

JCDecaux SA added 4 per cent to €31.93 after the outdoor advertising company said so-called organic sales growth accelerated to 4.5 per cent in the final three months of 2013. It was unchanged in the preceding quarter. Deutsche Bank AG had predicted growth of 2.8 per cent before the release.

US
US stocks rose in a modest relief rally after three days of losses on the S&P 500, with investors eyeing the Federal Reserve’s next move on its stimulus.

Bucking the day’s trend and limiting gains on the Nasdaq and S&P 500, shares of Apple dropped 7.7 per cent to $507.63, a day after holiday iPhone sales missed expectations. – (Addtional repoting, Bloomberg, Reuters)