Despite high-profile incidents, aviation safer than ever 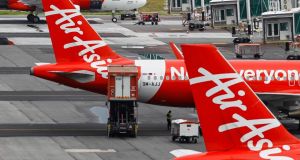 Bad luck is said to come in threes. For Malaysia’s aviation industry that superstition looks perilously close to the truth.

Flight QZ8501, which disappeared in the early hours of Sunday morning on its way from Surabaya to Singapore, belonged to Indonesia AirAsia, a 49 per cent-owned affiliate of Malaysian budget carrier AirAsia. Along with flight MH370, the Malaysia Airlines plane that disappeared en route from Kuala Lumpur to Beijing in March, and MH17, shot down over eastern Ukraine in July, its disappearance spells the end of a disastrous year for the sector.

Other than the Malaysian connection, however, there is nothing obvious to link the three incidents, according to aviation experts. This week’s flight appears to have gone down in the Java Sea shortly after requesting a change of course to avoid bad weather.

Harro Ranter, head of Aviation Safety Network, an independent body that monitors flight safety, said 2014 had seen the fewest fatal accidents since modern aviation began after the second World War. Only eight large passenger aircraft have been lost this year, he says, compared with an average of 17 in each of the past 10 years.

Even in Asia, where the number of passengers and the number of new budget airlines has been growing rapidly, accidents are on a downward trend.

Figures released by the International Air Transport Association in September show the accident rate in Asia-Pacific in the first nine months of 2014 was 2.2 per million flight segments, and 2.7 in each of the five years to 2013. That number did not include MH17 on the grounds that the plane was shot down.

The Asia-Pacific figure was marginally higher than that for Europe, at 1.9, and North America at 1.3. The Middle East and Africa were more prone to accidents, with rates of 6.2 and 13.6 per million respectively.

1 Admission of mistake in Oxford vaccine dose raises doubts over reliability
2 Direct sea routes to Europe offer certainty in choppy Brexit waters
3 Anti-alcohol zeal of public health experts peppers reopening debate
4 ‘I don’t need to do any of this. . .I don’t actually need to work.’
5 Pandemic brings a halt to Zara-owner’s Irish expansion
6 ‘Make plans but don’t hold on to them too seriously’
7 Cliff Taylor: Deal or no deal we are now heading for a hard Brexit
8 Move to EU or face disruption, City of London is warned
9 Topshop owner fights for surivival putting Irish jobs at risk
10 State may face €1bn in compensation in Covid-19 case, Press Up claims
Real news has value SUBSCRIBE