Occidental offer of $38 bn is backed by investor Warren Buffett 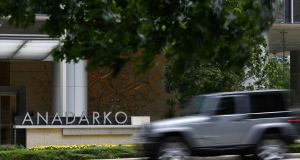 Chevron abandoned its takeover bid for Anadarko on Thursday, outmanoeuvred by Occidental Petroleum’s higher, $38 billion offer that included more than three times as much cash.

With a financing assist from billionaire investor Warren Buffett, Occidental, one-quarter Chevron’s size, is the likely victor in a contest that again proved the allure of US shale.

Occidental has said it plans to shed most of Anadarko’s non-shale properties in a deal that would cement its position in the Permian Basin of West Texas and New Mexico, the top US shale field.

Chevron declined to revise its offer after Occidental boosted the cash portion of its $76 per share bid and Anadarko’s board deemed it a superior offer. Chevron, the number two US oil producer, stands to receive a $1 billion breakup fee.

Chevron’s shares rose in morning trading, while shares of Occidental and Anadarko fell.

Chevron chief executive Mike Wirth said the company decided to walk away at a board meeting on Wednesday, even though it could have matched or beaten Occidental’s offer and saw Anadarko as a strategic fit.

“Make no mistake. We have the financial capacity to outbid Occidental, but we concluded that an increased offer would have eroded value to our shareholders and it would have diminished returns on capital,” Wirth said. “The bar is high. We don’t have a need to do anything. We are not desperate to do a deal.”

Chevron’s decision demonstrated strong capital discipline, said Jennifer Rowland, analyst with Edward Jones. “I am a bit surprised that they walked, but am pleased that they didn’t get caught up in a bidding war with Oxy, who comes across as willing to fight to win at all costs,” Rowland said. “Anadarko was a unique fit for Chevron, so I don’t expect them to go on a shopping spree in the Permian.”

Analysts said they do not expect another bidder to emerge.

“The industry is trying to show investors more capital discipline and if another suitor comes in that would be significantly counter to most companies’ strategies,” analysts at RBC Capital Markets said in a note on Thursday.

Investors have sold off shares of oil companies that increased spending on drilling instead of returning cash to shareholders. They have called for capital discipline, defined as increasing production by 4 per cent a year and maintaining a 4 per cent dividend.

One result: The value of US oil and gas mergers and acquisitions fell to a 10-year low in the first quarter as investors sold shares of companies that spent more on drilling than on buybacks and dividends.

The contest for Anadarko underscored the value of its assets in the Permian Basin, the vast shale field with oil and gas deposits that can produce supplies for decades using low-cost drilling techniques.

The region’s soaring production has propelled US oil production to 12 million barrels per day, more than Russia or Saudi Arabia.

Chevron already holds 2.3 million acres in the Permian Basin, and has vast mineral ownership there, which reduces its royalty rate.

Occidental outmanoeuvred Chevron by gaining cash and allies. It got a $10 billion investment from Warren Buffett’s Berkshire Hathaway and struck a deal with French oil giant Total to take most of Anadarko’s international assets, including a liquefied natural gas project in Mozambique. Total agreed to pay $8.8 billion for the assets once the merger goes ahead. – Reuters

1 Tax and spend: What have FG done for your pocket?
2 Fair Deal nursing homecare leaves little for bills and gifts
3 Pensions row fix could threaten future of State payment, actuaries warn
4 SAP hit by fall in cloud computing orders
5 Republic falling behind in offering incentives for entrepreneurs
6 Group that distributes Mercedes in Ireland shifts control offshore
7 Allergan completes €160m investment in Westport
8 Will the next decade be a better one for value investors?
9 Short-term mortgage arrears fall by a third, Central Bank says
10 Facebook rolls out tools to restrict data gathering on users
Real news has value SUBSCRIBE