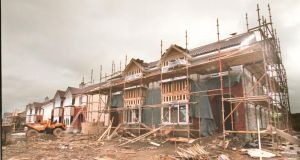 UK homebuilders led by Redrow and Taylor Wimpey gained in London after the government’s Help to Buy loan programme boosted house prices to their highest in three years.

Taylor Wimpey gained 6.3 per cent, the most since March 20th, after it reported a widening operating margin in the first half. Redrow rose 8.2 per cent after it said first-half profit would be at the upper end of analysts’ estimates.

Residential property values hit an average of £167,984 in June, the highest since August 2010, according to a report yesterday by Halifax.

“There’s a little bit of price movement out there but it’s sensible – not house-price boom territory.” – Bloomberg

1 Revised help-to-buy scheme for first-time buyers open for applications
2 ‘No demand... because there are no people’ at well-known Dublin pub
3 Divorce: What will it cost and can you afford it?
4 Management of Irish PR group Drury acquire agency from Omnicom
5 Post-Covid television starts to shape up – but with missing pieces
6 Nearly 30,000 could lose pandemic payment if they do not confirm eligibility
7 CityJet to exit examinership after High Court ruling
8 Transferring the family farm without a tax headache
9 Apple received $250bn dividend from Irish subsidiary in 2019
10 Tech giants back legal challenge to Trump’s foreign worker restrictions
Real news has value SUBSCRIBE