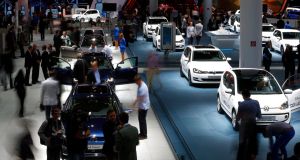 At the last Frankfurt motor show in 2011, the big story was not the cars, but the euro zone crisis and specifically how the continent’s car companies could survive.

This year, the crisis is waning but caution remains. As sales continue to lag, especially in Southern Europe, the most interesting new models are not sports or luxury cars, but family station wagons, the epitome of practicality.

The most troubled car companies, France’s Peugeot and Italy’s Fiat, have cut product-development spending so much that they have little new to display.

But cutting-edge designs are also few and far between on the stands of even such market leaders as Volkswagen.

As a barometer of Europe’s economy, the show’s atmosphere has improved in two years - from desperate to downbeat - while the attitudes of Europe’s top auto executives reflect much of the market’s ambivalence.

“Perhaps a little bit of optimism is justified,” said Trevor Mann, Nissan Motor executive vice president. “But I think the recovery generally will be slow (and) we should not get over-enthusiastic.”

Alfredo Altavilla, chief operating officer of Fiat’s Europe, Middle East and African regions, added: “The real answer is that no one has any visibility beyond the quarter. The trend is stabilising (but) it’s too soon to say that it’s picking up.”

In the absence of chief executive Sergio Marchionne, Altavilla was the senior Fiat official at Frankfurt, presiding over a low-key display that featured a seven-passenger derivative of the Fiat 500L MPV as the brand’s chief new product.

Even Fiat’s pricy Ferrari marque, which unveiled the stunning LaFerrari hybrid sports car earlier this year at the Geneva show, could muster only a slightly more powerful variant of its aging 458 series to anchor its Frankfurt stand.

VW chose to showcase its growing range of electrified vehicles, from the eUp! to the eGolf, adding several new versions of the Golf as well.

The German automaker’s budget brands, Seat and Skoda, likewise were relatively quiet, as were VW’s priciest marques, Lamborghini and Bugatti.

US multinational Ford Motor did not stray far from the mainstream either, unveiling a concept of the next-generation S-Max crossover vehicle that it plans to put into production in Spain in early 2015.

But two former Ford Europe premium brands - Sweden’s Volvo and England’s Jaguar - stirred up some attention with concepts that were noteworthy for hinting at a new styling direction for each and for introducing scalable vehicle architectures on which both brands intend to build compact vehicle families over the next several years.

Jaguar, now an affiliate of India’s Tata Motors, and Volvo, an affiliate of China’s Zhejiang Geely Holding Group Co Ltd, took different design paths, with Jaguar presenting the wagon-like C-X17, an early look at its first-ever crossover utility vehicle, and Volvo debuting the Concept Coupe, a sleek two-door that eventually will be joined by a range of compact models with common underpinnings, including a sedan, a hatchback and a crossover.

One had to look closely to find even a hint of frivolity on the relatively austere displays in Frankfurt. And one could find it in a burst of disparate concept vehicles with a common and often-derided styling element: gullwing doors. The birdlike portals could be found on Renault’s Dezir and R-Space concepts, on the sporty Audi Nanuk Quattro and on Opel’s Monza, the last a rather startling counterpart to General Motors’s otherwise staid Frankfurt stand.

But Karl-Thomas Neumann, hired this year to run GM Europe, sounded cautiously upbeat. “We’ve seen the first little light at the end of the tunnel,” he said. “No one here is expecting any wonders to happen, but I’m relatively confident that we’ve reached the bottom.”