One51 may miss out on takeover deals as flotation shelved 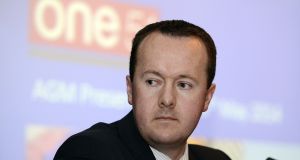 Manufacturing group One51 may miss out on a number of takeover deals after being forced to shelve its proposed launch on the stock exchange, according to its chief executive, Alan Walsh.

The plastics manufacturer and waste recycler yesterday indefinitely adjourned an extraordinary general meeting (EGM) meant to prepare it for an initial public offering (IPO) of its shares.

Chairman Denis Cregan said that it faced opposition from shareholders with about 35 per cent of the group. As a result it did not have the 75 per cent majority needed to allow the flotation to go ahead.

It is understood that businessman Dermot Desmond’s International Investment and Underwriting (IIU), which owns more than 20 per cent of One51, was one of those opposed to the IPO.

Speaking after the company’s annual general meeting in Dublin, Mr Walsh confirmed that it would have to leave one or two acquisition opportunities “on the table” as a result of not going to the stock market.

“There were opportunities that we could have unlocked,” he said. However Mr Walsh added that there was no guarantee that One51 would have bought these businesses had it gone ahead with the IPO.

As it is the group is weighing three or four potential deals in Europe and North America, specifically in plastics manufacture. Mr Walsh estimated that between its own resources and debt it could spend up to €100 million on buying rivals.

“We are in the best position that we ever have been in terms of the number of mergers and acquisitions opportunities,” he said.

“What is in the best interests of the company now is that we continue to grow shareholder value.”

Mr Cregan said that a number of concerns prompted opposition to the flotation. “The reasons for not supporting the resolutions were varied, from the quantum of equity we proposed, there was a pricing issue that some shareholders had and dilution issues figured on some people’s minds.”

However, he stressed that talks with the shareholders involved were amicable and constructive. One51’s other major shareholders are businessman Larry Goodman and Dairygold, Kerrygold and Lakelands co-ops.

Mr Cregan noted that cheap loans offered the best way for the company to improve shareholder value, but indicated that it did not intend to return to the days when debt threatened its viability.

Both he and Mr Walsh stressed that the company had sufficient resources to implement most of its growth plans.

1 Over 400 complaints from migrant workers at meat plants lodged with WRC
2 Coronavirus: We must save lives but we also need to live
3 Avoca warns of redundancies due to coronavirus
4 Companies without tax clearance shut out of Covid wage subsidy
5 Staff at Dublin and Cork airports to vote on work practice changes
6 Moving in and out of lockdown is a recipe for economic disaster
7 Grounded Aer Lingus pilots develop fix for turnaround glitches
8 Ufurnish: ‘It’s like Skyscanner, but for furniture’
9 Ulster Bank tells customers in error they cannot extend payment breaks
10 Taxi app Free Now blames ‘technical issues’ for driver payment delays
Real news has value SUBSCRIBE