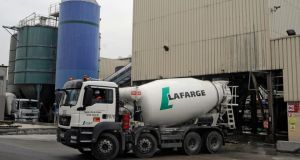 The boards of Lafarge and Holcim are due to announce the companies’ merger today. Photograph: Fabrice Dimier/Bloomberg

The world’s two largest cement makers, France’s Lafarge and Holcim of Switzerland, have agreed the terms of a merger that would create a company with a market value of about $55 billion (€40 billion), a source close to the deal said yesterday.

Such a merger, achieved by Holcim buying Lafarge, would be the industry’s biggest-ever tie-up and create an entity with combined sales of more than $40 billion, raising the likelihood it will draw scrutiny from global competition watchdogs.

The boards of Lafarge and Holcim approved the proposal on Saturday and are due to announce it today, the source said. The two groups have already begun to address possible competition concerns that would arise, the source added.

Lafarge declined to comment. Holcim was not immediately available for comment. Both firms are likely to be counting on support from major shareholders. More than a third of Lafarge stock is own by two investors who are represented on its board.

The two companies had already issued statements on Friday announcing they were in advanced talks to merge, a deal which would help them slash costs, trim debt and better cope with the soaring energy prices and weaker demand that have hurt the sector since the 2008 economic crisis.

Their share-price levels jumped to four-year highs on the news, lifting the entire cement sector. A merger would take out spare capacity and help consolidate the market, analysts said.

The terms of the transaction, reported by French newspaper Le Figaro and confirmed by the source, will see Holcim launch a public takeover for Lafarge payable in shares. If successful, the combined firm will be based in Switzerland but will have operational headquarters in Switzerland and France. Lafarge chief executive Bruno Lafont will become CEO, while the chairman will be Swiss.