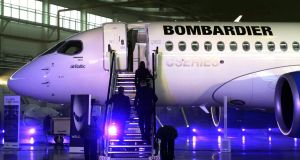 Bombardier’s C-Series CS100 aircraft seen inside a hangar during showcase at Riga International Airport, Latvia, as part of CS100 demo tour to Northern Europe. China’s Comac and Bombardier have held talks about a deal that could inject new life into the passenger jet programme Photograph: EPA/Valda Kalnina

China’s Comac and Bombardier have held talks about a deal that could inject new life into the passenger jet programme that mired the Canadian company in debt, several people familiar with the discussions said.

Comac is working with at least one bank on a tie-up that could involve China’s state-owned aircraft manufacturer making an investment in Bombardier’s commercial aerospace arm or taking a stake in the C-Series 100-150 seater passenger jet programme.

“Everything is on the table,” said a person with knowledge of the discussions.

Bombardier has a major operation in Belfast in the former Shorts plant where it employs around 4,500 people, a number that is currently being cut to 3,500.

The companies are understood to have been in discussions about a deal for some time, although no decision is imminent, the person said. Comac did not respond to a request for comment. Bombardier also declined to comment.

The Canadian company, which has received nearly $3 billion in publicly funded cash injections over the past two years, is exploring a similar industrial tie-up with Siemens for its rail business. An attempt in 2015 to rescue the costly C-Series programme by injecting it into a joint venture with Airbus collapsed in acrimony.

The Chinese approach to one of Canada’s most-prized industrial assets comes after at least one other government-controlled Chinese company launched talks with the group, which have since ended. Bombardier has sought partners in its aerospace and transport divisions to mitigate the unexpectedly high costs of bringing its C-Series passenger jet into service, with the programme running billions over budget.

The jet is widely acknowledged to be highly efficient but it has struggled in recent months to win big new orders with both Boeing and Airbus cutting prices on their smallest aircraft.

Access to the C-Series programme and its new-generation aircraft technology would boost the development of Comac’s decades-long haul toward becoming an aviation giant.

Comac and Bombardier have been close for years. In 2012, the companies signed an agreement to find commonalities between the C919 and Bombardier’s C-Series to reduce training and maintenance costs.

The companies have floated the idea of co-operating to compete against Boeing and Airbus. Bombardier has also advised Comac on its smaller regional jet, the ARJ-21, which went into commercial operation last year following years of delay.

Comac’s trajectory to the global market has been turbulent. The C919, the test flight of which came years behind schedule, is also 10-15 years behind the rest of the industry. Despite those problems, China is expected to become the world’s biggest aviation market by 2024. C919 already has 500 orders from Chinese airlines.