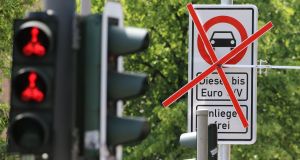 Hamburg has become the first German city to introduce a ban on older diesel cars, as a crackdown on vehicles blamed for harmful emissions in urban areas gathers pace.

The ban follows a crucial ruling in February by Germany’s top administrative court that cities had the right to proscribe diesel cars as a last resort to prevent air pollution, in a victory for environmental groups. Last week the European Commission referred Germany and two other countries to Europe’s highest court over their failure to clean up “significant and persistent” air pollution.

The Hamburg ban is a blow to Germany’s powerful motor industry, which is already struggling with a drop in demand for diesel cars. It is also an embarrassment to the government of chancellor Angela Merkel, which is firmly opposed to city driving bans.

Other cities could now follow Hamburg’s lead. “By autumn we will have developments in Stuttgart, Munich, Frankfurt, Wiesbaden, Darmstadt and Aachen,” said Remo Klinger, a lawyer acting for two big environmental groups that have been behind many of Germany’s air pollution cases over the past few years.

The EU has said that 70,000 deaths a year in the bloc are linked to high levels of nitrogen dioxide (NO2), which is a leading cause of respiratory disease. Excessive NO2 levels in European cities have been partly blamed on older diesel cars that produce higher levels of emissions on the road than petrol vehicles.

Pressure on the German auto industry has grown since the Volkswagen diesel scandal of 2015, when the carmaker admitted installing cheat software to trick laboratory emissions tests. European sales of diesel vehicles fell to 38.1 per cent of the total last month, down from 47.4 per cent a year ago, according to Evercore ISI.

The Hamburg measure, which will come into force on May 31st, is limited in scale. It covers just two sections of road in the Hamburg district of Altona-North, but affects all diesel cars up to and including the “Euro 5” emissions standard.

The first ban, which will affect a 580m stretch of Max-Brauer-Allee, affects both cars and trucks, while the second, involving a 1.7km stretch of Stresemannstrasse, will affect only older trucks - though exceptions will be made for residents and their visitors, as well as ambulances, refuse and delivery trucks and taxis. After a transition period, traffic police will enforce the bans with vehicle checks.

According to the German federal motor transport authority, there were 264,406 diesel cars registered in Hamburg at the start of the year, of which only 96,356 comply with Euro 6, the latest generation of diesel technology. The rest are Euro 5, Euro 4 or lower. As a result, some 168,000 passenger cars would be affected by the ban, as well as other German and foreign diesel cars that enter the city.

Hamburg’s authorities first decided to impose transport restrictions last year, but they could not be implemented until Germany’s federal administrative court had ruled on whether such diesel bans were legal or not. The court published its written opinion to February’s verdict only last week, removing the last hurdle for the implementation of driving bans.

The car industry, which is keen to promote the benefits of the latest diesel engines in order to recoup its investments in the technology, claims that Euro 6 diesels emit the same level of NO2 as the current generation of petrol engines, while still producing around a fifth less carbon dioxide. – Copyright The Financial Times Limited 2018