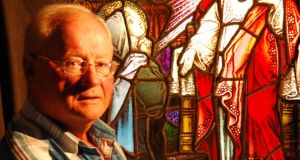 Ken Ryan of Abbey Stained Glass. “We’re in a very specific niche and our business will never be huge. But there is no reason for it not to survive”

For the last 70 years the Abbey Stained Glass Company has been run by three generations of the Ryan family.

This era is now coming to an end: there are no more Ryans to take the helm. Ken Ryan, who has led the business for the last 30 years, is retiring and the company has been bought by four of its long-serving employees, William Malone, Conor Farrell, Colin Byrne and John McKeon.

“I am here in the background for as long as I’m needed and I still go with William to look at potential jobs, but in time all of my duties will pass to the new owners,” Ryan says.

Abbey’s main business is conservation. It still gets commissions for new pieces, but the church-building programmes that kept it busy for decades are a thing of the past.

“We didn’t benefit from the Celtic Tiger in the same way as other sectors so it wasn’t as if we had a surge in work that suddenly dried up in 2007/08,” Ryan says. “Where the downturn has had an impact is in terms of there being little money available for repairs and restoration.

“We have managed to weather the storm with careful management of our resources and trying to get better terms from our suppliers.”

At its height Abbey Stained Glass employed around 18 skilled craftsmen. This has now dropped to nine through natural attrition. Ryan estimates the fall in revenues during the downturn has been in the order of 50 per cent.

“People talk about this recession as if it’s something new for the country. But for most of my business life, and that of my father, Ireland was in a state of continuous recession.

“When I left college, having qualified as a quantity surveyor, I, and thousands like me, had no option but to emigrate to get a job.

“The advantage of managing a business when money is scarce is that it makes you prudent. You only buy what you can afford and you stay well away from borrowing money.

“Credit has been on offer over the years but we never used it. We waited until we could afford to buy something we wanted and paid for it in cash.”

The Abbey Stained Glass Company was established in the early 1940s by Ryan’s great-uncle Tom. Tom was succeeded by Ken’s father Frank.

“When my father was running the company we did quite a bit of business in the US as there were strong links between Ireland and the US through the clergy,” Ryan says.

“My dad spent three months in the States every two years and came back with a healthy order book for new windows. In my dad’s time the balance was 75 per cent new commissions and 25 per cent restoration. Since I’ve been running the company it has gradually become the other way around as the opportunities in the States dried up. Our work is largely the conservation and repair of stained glass windows, mainly in Ireland, with some projects in Britain.

“Ireland has produced a wealth of superb stained glass artists such as Harry Clarke, Beatrice Elvery, Evie Hone, Brendan Mullins and Kevin Kelly, and their magnificent work is on display all over the country.

“Over time the windows buckle from heat and sunshine, and as the lead becomes pliable the windows may break. The lead really needs to be removed and replaced every 70 years.

“This type of repeat work is the company’s bread and butter, and I think we’ve probably worked in every parish in the country. But when there’s no money around, conservation gets put on the long finger.

“Fortunately, of late, we are being asked to tender much more frequently for jobs although it can be up to a year before the work actually begins.”

One of Abbey’s big projects of late has been St Mel’s Cathedral in Longford which suffered a catastrophic fire in 2009. Its showpiece Harry Clarke windows had to be salvaged and painstakingly restored, a job made a little easier by the fact that abbey had worked on the windows in 1979 and still had the drawings and photos on file.

“Ours is a very traditional, skilled business so it has not been possible to find another avenue for our talents. What we do doesn’t lend itself to spinning out into something else. We’re in a very specific niche and our business will never be huge. But there is no reason for it not to survive,” Ryan says.

“Things are picking up and I think there is a bright future ahead for the company. We have been busier in 2013 than in the previous four years, and I hope turnover will be back to normal levels in 2014.

“We have always had our share of competition but while others may win on price, I think we will always win on the quality of the end result. I think our clients know that and this is why they have kept coming back for 70 years.”