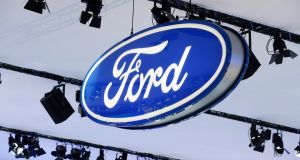 Ford plans to cut hundreds of jobs in Europe as it seeks to sustain momentum in the fiercely competitive market and build on its first annual profit in the region for five years.

The US carmaker on Wednesday launched a turnround plan to save $200 million a year at its European business, which racked up almost $4.5 billion in pre-tax losses between 2011 and 2014.

Last year the company eked out a $259 million full-year pre-tax profit in the region, part of global pre-tax income of $10.8 billion.

“It’s time to step on the gas,” said Jim Farley, who took over as Ford’s head of Europe, Middle-East and Africa 13 months ago. “We have to accelerate our work to become leaner and make tougher choices about where we compete.”

Ford will offer voluntary redundancy to white-collar workers, in a scheme that is likely to affect hundreds of the regional unit’s 10,300 salaried employees, Mr Farley added.

The company also plans to phase out less successful models – expected to include large cars such as saloons and people-carriers – and focus on profitable niches such as “crossover” sport utility vehicles, vans and high-performance versions of mainstream models.

Ford’s passenger car sales grew 8.6 per cent in Europe last year to just underone million units, making it the region’s second-biggest marque behind Volkswagen’s namesake brand. It meanwhile retook the lead in European commercial vehicle sales for the first time in 18 years, thanks to a revamped and expanded Transit line-up.

But the operating profit margin remains razor thin, at just 0.9 per cent in Europe. Ford has pledged to increase this next year, and wants to reach a margin of 6-8 per cent “in the longer term” in Europe, which accounts for almost a fifth of group-wide revenues.

That will be achieved partly by offering severance packages and early retirement to workers. Ford has also taken on a greater proportion of temporary staff and shifted work to low-cost plants, such as Valencia. Ford’s installed capacity utilisation in Europe is at about 80 per cent.

Ford is targeting annual manufacturing savings of more than 7 per cent a year by finding more efficient ways of working.

Volume carmakers have struggled for years with a European market that contracted for six straight years following the financial crisis. The likes of Ford, Fiat Chrysler Automobiles and Opel – General Motors’ European arm – were hit badly by the fall in sales, which left expensive plants running at well below capacity.

The mass-market carmakers’ plight was exacerbated by premium marques such as BMW, Audi and Mercedes-Benz, selling more affordable models. That, combined with the rising popularity of low-cost brands such as Kia and Dacia, forced Ford to close three plants, including its Mondeo facility in Belgium, a stamping works at Dagenham and a Transit-making factory in Southampton.

But two years of recovery in the European market has nursed the likes of Ford, Fiat Chrysler and PSA Peugeot Citroën back to profitability.

1 How can I view my dead brother’s will if I’m not the executor?
2 Michel Barnier rejects UK’s call for Canada-style trade deal
3 Applications for 961 new homes in Dublin and Meath rejected
4 Barry’s Hotel at €8m comes with potential to double in size
5 Bursting of Tesla bubble a case of ‘not if, but when’
6 Remarks by George Soros cause jitters as Year of the Monkey starts
7 Build high-rise apartments to solve the housing crisis, says Francesca McDonagh
8 Computer-driven investing: who needs people?
9 UK Fraud Office examines £1.2m billion Sumitomo loss
10 Why society isn’t ready for the high-tech future that is fast approaching
Real news has value SUBSCRIBE