Engineering a better future through smart solutions and hard work 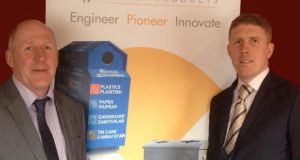 Noel and Stephen Larkin, general manager of Larkin Engineering in Tuam, Co Galway: ‘The recession taught us to be more focused on turning quotes into proper sales and we benefited from that’

Many of us think long and hard about what type of furniture we want in our homes, but few of us give much thought about what is placed outside on our streets and roads. For the Larkin family, it’s a different story. Their working days consist of thinking about little else.

Established in 1986 and based in Tuam, Co Galway, Larkin Engineering is a family-run firm founded by Noel Larkin. Now one of the leading suppliers of street furniture and general engineering components in Ireland and Britain, it has a client base of more than 1,000 organisations, including many of the biggest local authorities and construction companies on either side of the Irish Sea.

The company been busy decorating streets and paths for almost 20 years now. In that time, it has built up a solid reputation that has helped it to grow its business and to weather the rocky years of the recession.

With a full order book and interest from as far away as the Middle East, the company is optimistic that it has what it takes to keep going for many years.

“My father started the business after spending a few years doing bits of engineering work for local farmers and businesses. This led him to begin doing some fabrication work for companies in the area such as Tuam Farm Supplies. He was making things like frames for wheelbarrows and agricultural products and so things started from there,” said Noel’s son Stephen, the company’s general manager.

“Around 1995, Noel was approached by the wife of the owner of a local company called Gardenfield Engineering about buying the firm after her husband died. My father could see it had plenty of potential as it was already selling litter bins to a number of county councils in Ireland and recycling was becoming big.

“He thought there were massive opportunities for growth in street furniture. He acquired the company and started focusing primarily in this area as Larkin Street Products, which later turned into what we have now.”

“We have a full product range that we offer to clients, but if someone is looking for something else, we can create bespoke solutions as well,” said Stephen.

“We are holding a couple of contracts right now, including supplying all the bus poles and timetable carousels for Bus Éireann in the Leinster region. We also provide all the passenger shelters for the Dart lines and we’ve just put in tender proposals to do all the litter bins for both Durham and Belfast councils.”

The company expanded in to the UK in 2003 and had great success initially, with exports rising from 5 per cent of turnover to 30 per cent before the recession. It’s now at about 20 per cent.

“We took a bit of a hit when the downturn came, as a lot of companies we worked with went out of business. We had a few bad debts lost in those years and so had to rein the firm back in a bit for a few years to make it more sustainable.

“This meant we lost market share but it was necessary for us to regroup and focus on core areas to get by. Since late 2010, we’ve started pushing sales again in the UK and things are going well.

“I’d say we got by in the recession because we made ourselves more aggressive in terms of looking for work. If we heard of anything, we’d push hard for it and in many instances won the business. The turnover in terms of quotations leading to sales increased during that time because we pursued it.

“In the boom, we would send out plenty of quotes, but didn’t really follow up on them to secure deals as we had enough work going. The recession taught us to be more focused on turning quotes into proper sales and we’ve benefited from that.”

Stephen said the company faced plenty of competition, but seeking accreditation had helped it get more business, particularly in the UK where firms are seen as more credible if they have achieved it. The company has both ISO 14001 and ISO 9001 certification.

While business may be booming, the company isn’t about to rest on its laurels.

“Both Noel and I are firm believers in not standing still. Our main focus over the next few years will continue to be the UK market. Rather than expand anywhere else right now, we want to get good share there again before we consider other options. We are also getting inquiries from outside Europe and are looking at those.”

7 Everyday banking: Are we getting less but paying more?