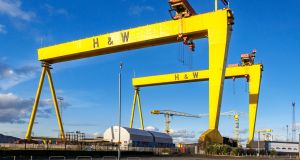 Dolphin Drilling ASA had been trying to find a buyer for Harland and Wolff in Belfast since last year. Photograph: iStock

Dolphin Drilling ASA, the majority owner of Harland and Wolff in Belfast, has filed for bankruptcy and a new holding company has been established.

The group, with its headquarters in Norway, said it had completed a financial restructuring process and had transferred its operating subsidiaries to a new holding company, Dolphin Drilling Holdings Limited, that has been incorporated in Jersey.

Dolphin Drilling ASA, which was formerly known as Fred Olsen Energy, entered bankruptcy after failing to agreed terms with creditors.

The group had amassed debts of more than $1 billion (€880,300), and was struggling to stay afloat in a sector which had been hit hard by a global slump in oil prices between 2016 and 2016 and an increasingly competitive marketplace.

Dolphin Drilling ASA had been trying to find a buyer for Harland and Wolff in Belfast since last year.

To date there have been no details of any potential bidders for the historic shipyard.

But Harland and Wolff said on Wednesday that the latest restructuring programme by its Norwegian owner would not affect its day-to-day operations or its 100 employees in the North.

Harland and Wolff, which built its last ship in Belfast in 2003, now specialises in heavy marine engineering and ship repair. It also designs, creates installations and provides services for the offshore and renewable energy sectors.

In a statement Harland and Wolff Heavy Industries Ltd said the “sale process” for the Northern Ireland shipyard was “currently being conducted” and it was operating on a “business-as-usual basis”.