Exposure of Cavan insulation group to high-rise buildings accounts for less than 1% of €4.7bn in sales 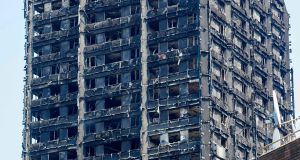 The burned-out shell of the Grenfell Tower block is seen near the scene of the fire in North Kensington, west London on June 20, 2017. Photograph: Getty Images

Analysts at Wall Street investment bank Morgan Stanley have pushed back against criticism from investors on their bullish view on Kingspan, having started coverage of Cavan-based insulation group’s stock at the end of last month with the equivalent of a buy recommendation.

However, the analysts have countered that Kingspan’s insulation projects are mainly exposed to non-residential low-rise buildings.

“Second, we find that some of Kingspan’s products [used in a system] show equivalent fire resistance to mineral wool when tested in a real fire scenario,” they said, after carrying out what they called a “deep dive” into fire regulation and combustibility tests.

Finally, Morgan Stanley estimates that Kingspan’s planned launch of a “non-combustible fibre-free product in 2020” could push the group’s earnings before interest, tax, depreciation and amortisation (Ebitda) by a double-digit percentage.

The report comes two years to the month after the Grenfell Tower fire in London, which caused 72 deaths and resulted in Britain introducing tighter rules to restrict the use of combustible products in buildings.

Kingspan has previously said that less than 5 per cent of the insulation material used in the London tower came from the company. The use of the company’s Kooltherm K15 product on the Grenfell Tower facade was without the company’s knowledge, “as part of a combination for which it was not designed and which Kingspan would never recommend”, it has said.

Most of the insulation used for the 24-storey block’s facade was based on polyisocyanurate. This product has been the main area of scrutiny and had no connection with Kingspan.

“The company disclosed that the stricter regulation following the Grenfell incident (ie the ban on combustible products in England’s high-rise buildings), has a limited impact of just about £10-£20 million [of] annual revenue.”

Morgan Stanley estimates that Kingspan’s exposure to high-rise buildings accounts for less than 1 per cent of its total €4.7 billion of annual sales.

The market value of Kingspan hit an all-time high of €8.6 billion on Friday, having soared by 27 per cent so far this year, helped by falling raw material costs and growing demand for its products.

The Morgan Stanley analysts estimate that the group has scope to cut its prices by 3 per cent this year and still improve its margins and win back market share lost to the likes of Rockwool over the past two years.

“Structural demand for more energy-efficient building, particularly tighter energy-efficient regulations, should see Kingspan outgrow the construction market for the foreseeable future,” they said, reiterating their outperform rating, the equivalent of a buy, on the stock.