Drive gets under way to remould car production in Britain

UK’s car industry growing after a low in 2009, but fears of sustainability remain 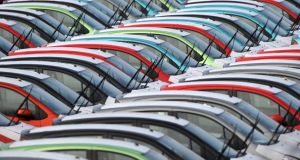 The motor industry accounts for 11 per cent of the UK’s export earnings, employs 770,000 from shop floor to showroom and generates £64 billion (€87 billion) in annual turnover.

The electric supercharger conceived in Essex is British innovation at its best. A compressor driven by an electric motor that forces more air into the intake, it produces more power from smaller engines, increasing the fuel economy by up to 20 per cent, while eliminating the frustrating delay known as “turbo lag”.

And it will soon find its way into top-end cars. It is also French.

Valeo, the Parisian automotive supplier, bought the technology when it acquired part of Controlled Power Technologies in Basildon in 2011. It meant the supercharger, and 10 employees, were transferred to foreign hands, but secured a viable, mass-market future for the product.

“I don’t know of any traditional UK tier-one supplier to the automotive industry that would have been in a position to take this technology into production,” says Mark Criddle, formerly of CPT but now an engineer with Valeo.

That tone contrasts with the mood of optimism surrounding the British car industry.

Ten years on from the failure of Rover, the sector is booming.

The collapse into administration of the former British Leyland in April 2005, which led to the loss of about 10,000 jobs in and around the Longbridge plant near Birmingham, prompted many to call the demise of British carmaking.

But a decade later and now largely under foreign stewardship, the motor industry accounts for 11 per cent of the UK’s export earnings, employs 770,000 from shop floor to showroom and generates £64 billion (€87 billion) in annual turnover.

Production has soared from a low in 2009 of less than one million vehicles to more than 1.5 million vehicles last year, 80 per cent of which were exported. The cars that stay in the UK are snapped up in a domestic sales market that has recorded three years of continued growth.

Sunderland makes more cars than Italy. The all-time record of 1.9 million, set in 1972, is once more within sight.

“In the past, the industry was poorly managed and state supported – a short route to oblivion,” says Steve Nash, chief executive of the Institute of the Motor Industry, who worked for BMW during its ownership of Rover before 2000.

Since then, he says, the industry has shed “moribund” capacity – for instance, at Longbridge – and overhauled management. A reputation for poor quality, weak productivity and turbulent labour relations has been turned round. “We’ve been able to attract investment from people who know how to do it properly,” he says.

These are Indian, Japanese and German owners, as well as German chief executives such as Ralf Speth at JLR, once part of the British Leyland empire and now, owned by Tata Motors, the single biggest employer in the UK automotive sector.

“Tata really gives us the freedom to invest every cent, more or less, into Jaguar Land Rover,” says Mr Speth, speaking at the company headquarters in Whitley, Coventry.

JLR and Nissan, which runs one of the world’s most efficient car plants in Sunderland, have found success by tapping into voracious demand for “crossover” sport utility vehicles, which look like compact off-roaders.

At the higher end of the spectrum, others, such as Rolls-Royce and Bentley, have ridden the swelling tide of wealthy global customers, selling “Made in Britain” as a luxury brand.

“It’s not only being on British soil, it’s also working with British craftspeople,” says Torsten Müller-Ötvös, chief executive of Rolls-Royce Motor Cars. “But you also need to understand how to organise that, and the Germans are quite good at that.”

But while the headline numbers are good, there are fears that the achievements in assembling upmarket vehicles alone do not guarantee the long-term health of the sector.

During the past 20 years, the UK has lost almost all of its “tier one” suppliers. Dunlop, Lucas and Automotive Products have all but disappeared. Only GKN, a leader in power-train technology, remains.

Beneath that lies a web of small and mid-sized enterprises that have struggled since the downturn with a lack of access to finance.

The SMMT industry trade body says domestic component suppliers saw a 19 per cent rise in sales to British-based vehicle manufacturers in 2014. But the UK car industry still suffers from a large trade deficit, with almost £48 billion of vehicles and parts imported last year.

Manufacturers, having turned their backs on UK suppliers in the 1980s, say they would like to source more components locally. They are keen to reduce supply chain risk and cut lead times, but they cannot find capable, qualified suppliers with the right capacity at the right price.

As such, the government estimates that the “missed” opportunity for larger UK suppliers amounts to £4 billion. “That is still to play for,” says Garel Rhys, a motor industry expert.

“A small British content ... allows the effect of the assembly to be diluted in the rest of the economy.”