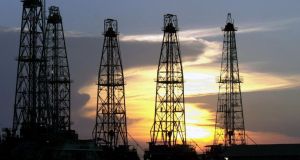 An oil field in Venezuela. Ruined by sanctions and the collapse in the price of oil, Venezuela’s economy is in convulsions. Photograph: AP Photo/Ana Maria Otero

The perils of operating in a highly unstable market, such as Venezuela, are outlined in some detail in the annual report of the Smurfit Kappa Group (SKG), which was published in recent days.

Ruined by sanctions and the collapse in the price of oil – the country is a major producer and has grown accustomed to high prices – Venezuela’s economy is in convulsions. Its currency, the bolivar, has effectively been devalued through a chaotic new exchange rate system that appears to be floundering shortly after its official launch.

Hyperinflation appears to be just over the horizon, if not already present: the annual inflation rate could reach 188 per cent this year, according to a recent note from Barclays. Last month, the new exchange rate system of controls was introduced and chaos has since ensued.

What does SKG have on the line?

At the end of last year, according to its accounts, the group had net assets of €425 million in the country. This was about 18 per cent of the group’s total net assets, so it is a significant slice. It had cash balances there of €84 million, and the country was responsible for about 7 per cent of its earnings. Since then, inflation has taken off like a rocket.

José González, the head of the Venezuelan paper and packaging industry representative group, recently said the industry has only enough stock to last until May, as local companies struggle to buy foreign currency to import the raw materials needed.

Volumes in SKG’s Venezuelan business declined by 10 per cent last year, and are projected to do something similar in 2015.

With the currency situation out of its hands, SKG has said it will focus on improving “operating efficiency” in the country. With demand falling, “improving operational efficiency” basically means cutting costs.

It could be risky to start cutting jobs in a politically unstable country run by a firebrand socialist. SKG has much to lose in Venezuela, but it appears the company will simply have to sit tight and hope the situation improves.

Perversely, a rise in oil prices, while negative for the rest of SKG, might actually bring some stability to Venezuela and the bolivar, which would be in the group’s overall interests.