Bombardier’s £500m investment in Belfast was not enough

Analysis: Aviation company’s financial woes have caught up with its workforce in North 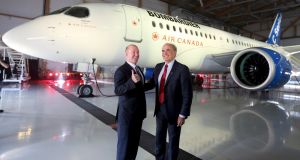 When Bombardier first selected its Belfast facility back in 2008 to design and manufacture the wings for what it claimed would one day be the “most efficient aircraft in the skies”, it was heralded as the “most important investment in Northern Ireland for a generation”.

However, the potential the new C-Series promised to deliver for Belfast has not quite got off the ground.

Bombardier invested more than £500 million to give Belfast wings.

This was underwritten by £155 million in financial support from the UK’s Department of Business and the Northern Ireland Executive.

It was the largest ever single investment in the North by any company.

As part of the investment the Canadian group developed a new 600,000sq ft facility at its east Belfast facility to produce the wings which are manufactured using carbon-fibre composite technology developed by Bombardier engineers in Northern Ireland.

By bringing the wings programme to Belfast it was hoped to sustain more than 1,100 jobs over the peak production period for the C-Series in what was scheduled to be a 20-year project.

In recent times the aerospace group has repeatedly axed jobs across its global operations, with Belfast rarely escaping.

Although there are now commitments from buyers for a total of 678 aircraft, there are just firm orders for 243.

This is shy of the 300 firm orders Bombardier had hoped to secure before the aircraft enters service in the second quarter of this year.

Bombardier’s most recent financial woes have not escaped its workforce in the North.

They feared they were vulnerable to further cuts because of the group’s poor financial performance in the last 12 months.

The company is one of the biggest private sector employers in the North with 5,500 directly employed and an annual wage bill in the region of £180 million.

Bombardier’s presence in the North, which dates back to 1989 when it acquired what was then Short Brothers from the UK government, also indirectly supports thousands of other jobs in local companies which supply goods and services to it.

Last year Bombardier awarded contracts worth just under £100 million to companies based in the North and the Republic.

However, he warned that its Northern operations must also accept responsibility for the role it plays in the wider Bombardier group.

Workers at the plant last December overwhelmingly rejected proposals that would have extended the working week by an hour and put in place a pay freeze as part of the group’s efforts to cut costs in the Belfast plant by a fifth by 2017.