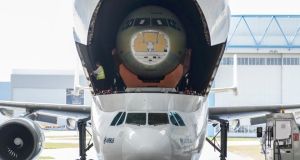 Airbus defied warnings of a slowdown in the jetliner market with a steep production boost for its top-selling A320 and announced its biggest ever dividend.

The firm’s confidence about demand and a switch to the new A320 model lifted its shares and came despite a fresh charge of €551 million due to delays to the A400M military transporter.

The world’s second-largest aerospace group after Boeing said it would increase production of the A320 jet family to a record 50 a month in early 2017.

The strong fourth quarter results and 60 per cent hike in the dividend, as well as solid cashflow, added €2.5 billion or six superjumbos’ worth of value to its shares today.

Core operating earnings before one-off items rose 21 per cent to a stronger-than-expected €1.476 billion in the fourth quarter on revenues up 9 per cent, amid strong jet deliveries.

Airbus raised its dividend to a record €1.20 per share after a 59 per cent leap in annual net profit buoyed by disposals. For 2015 it forecast higher revenue and a slight increase in core profit. – Reuters

1 How much state pension will I get next year?
2 Oxford Covid vaccine trials offer hope for elderly
3 Tesco takes to the skies with home delivery by drone
4 Hurrah for the companies giving staff more time off
5 Covid-19 will worsen shortage of accountants, says CPA Ireland
6 Rebuilding cost increases could leave homeowners underinsured
7 How much life insurance is enough?
8 Help, I’ve no PRSI stamps – can I still get a pension?
9 EU has helped transform living standards of Europe’s people
10 Beef farmers have real problems and they will get worse
Real news has value SUBSCRIBE