Lotto under pressure, Legg Mason gears up and the Mother of all Demos 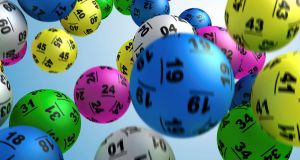 The National Lottery’s share of the Irish gaming market is coming under pressure from alternative forms of gaming and “substitute” lotto products.

The National Lottery’s share of the Irish gaming market is coming under pressure from alternative forms of gaming and “substitute” lotto products, according to a new report, writes Eoin Burke-Kennedy. The research by Indecon consultants, commissioned by the National Lottery, estimated the franchise now commands just 13 per cent of the State’s €5.6 billion betting and lottery market.

US fund manager Legg Mason is gearing up for growth in Dublin, with plans for its new Brexit-inspired office set to evolve depending on the outcome of the UK’s departure from the European Union. Fiona Reddan reports.

An Post has set a deadline of January 30th for lenders to express an interest in setting up a mortgages joint venture, months after the State-owned postal service operator signalled its intention to enter the market with rates that undercut mainstream banks, reports Joe Brennan

Investors who trade infrequently will see the cost of holding an online trading account increase by as much as 150 per cent from next year, as both Davy and Goodbody Stockbrokers are set to raise their charges, writes Fiona Reddan.

The number of stock market flotations in Europe this year is set to be down 20 per cent on 2017 as initial public offering (IPO) activity is hit by volatility and Brexit, according to a report published by PwC. Michael O’Dwyer has the details.

Plans to position the Republic as a leading location for cybersecurity expertise have received a significant boost with IDA Ireland agreeing to fund a new national cluster focused on the technology. Charlie Taylor reports.

Weekly columnist Karlin Lillington on the Mother of all Demos and the power of possibilities.

Internet users can take back control of their data while swapping it for cash or services, writes Marie Boran, but beware...

Olive Keogh finds out how Pest Pulse is applying Internet of Things solutions to keep rodents under control.

Can businesses afford to be without the gift of the gab in the future, wonders Chris Horn?

Cantillon on the many changes at INM, the lotto as a tax on the poor and, of course, Brexit.