LogoGrab: a small company with big ideas makes the most of Irish support 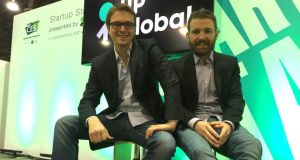 There are already too many digital marketing companies out there providing online brand presence analytics. But how many can boast the ability to measure how you’re doing offline?

No, this isn’t about cold-calling people or market research phone surveys. Through two years of R&D at the ETH Zurich in Switzerland, whose graduates include Albert Einstein, the technology required to make instant brand image recognition possible has come about.

In essence, LogoGrab allows consumers to take a photo on their smartphone of a company’s logo and, if said company is signed up to their service, the image will provide access to all manner of information about the brand, from its nearest locations to special offers.

“Perfecting our patented image recognition technology for specifically detecting logos has been extremely challenging,” says Luca Boschin, chief executive of LogoGrab, which exhibited at the Consumer Electronics Show (CES) in Las Vegas last week. “For years, many have tried to come up with a robust and sustainable solution, but none could find one.”

While brand recognition might make one logo stand out more than another, there are often very small differences between them. You have very simple points of reference on different backgrounds with different colours and that’s it.

“The technology allows us to share more information about products or activities of a company through their logo. Even for events like CES, it was a great way to share information about what was going on. Wherever you went around CES, if you saw the event logo, you could go onto LogoGrab.com with a smartphone, scan the logo and then you would have instant access to the latest news, events, and timetables of talks and speakers.”

The company has just signed a deal with McDonald’s in Europe. “They are rolling out a big campaign this week using our technology,” Boschin says.

How did a bunch of Italian techies end up in Ireland? Maybe they were looking for access to the all-important US market.

“Ireland was a very obvious choice for us,” he says. “We developed our technology in Switzerland but for the company to really grow we needed to set up in an English-speaking country, which could also serve as a pathway to the US.”

Scaling can be a problem for start-ups in other European countries for a number of reasons. “We would see a lot of Italian entrepreneurs looking at Ireland to scale their business,” says David Scanlon, Start In Ireland project executive for Enterprise Ireland.

“They have more access to venture funding here as there are simply more VCs in Ireland than in Italy. We have more experience in the investment scene.

“Language is a huge one too. Coming from Zurich, their target market was always the consumer-savvy North American audience. So they need to speak the language. The geography also made more sense as we have more direct flights to the US.”

Frequently travelling all over Europe promoting the Enterprise Ireland Start In Ireland initiative, Scanlon likens himself to a concierge for the Irish start-up scene.

“If someone is interested in getting in, I’m the first person they meet,” he says. “Once they’re here and established, we consider them to be another Irish start-up. It doesn’t matter where they’ve come from.”

“We have been blown away by the support we have received in Ireland,” says Boschin. “Enterprise Ireland, along with other private investors, have helped us financially. But they’ve also provided incredible support with locations and offices worldwide. Ireland really is an amazing hub for start-ups.”

“We also have Italians, Argentinians, Spanish and Ukrainians setting up business,” says Scanlon. “They may have worked in Google or Facebook here and then saw that the start-up ecosystem was so favourable. We may never have the scale of Silicon Valley but what we do have is diversity, which is one of the biggest ingredients for success.

“We have smart people coming here from all over the world and the benefits of making the Irish ecosystem more diverse are two-sided because if an Irish company wants to make a connection with the Italian market or any other one, we know who to talk to.”