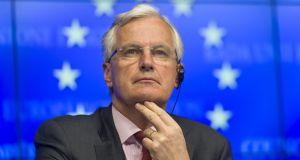 The introduction of a new intra-bank payments system which is supposed to speed up financial transactions across the European Union has been delayed as a result of “lazy banks... dragging their heels,” a leading business group has claimed.

The Single Euro Payments Area (SEPA) was due to come into being across the eurozone countries on February 1st, standardising the cost and complexity of cross border transactions. However the deadline has been extended by six months as a result of delays implementing the new system in some member states.

The purpose of the change is to make the banks in the 28 EU member states, as well as Norway, Liechtenstein, Iceland, Switzerland and Monaco, speak the same financial language to allow for faster cross-border credit transfers and debit payments.

It was to be rolled out across the eurozone first with the other countries following suit by the end of 2016. While it will still formally come into being in euro countries next month, payments made in alternative formats will also be accepted by banks across the EU until the beginning of August.

“I regret having to do this but it is a measure of prudence to counter the possible risk of disruption to payments,” EU Internal Markets Commissioner Michel Barnier said.

“I have warned many times that migration was happening too slowly and call once more on member states to accelerate and intensify efforts to migrate to SEPA,” Mr Barnier said. “The transition period will not be extended after August 1st,” he added.

The Irish Small and Medium Enterprise Association (ISME )reacted furiously to the announcement and criticised “lazy banks in Ireland and across the EU for their lack of preparedness in not ensuring SEPA solutions were in place for the business community and the SME sector in particular”.

The ISME chief executive Mark Fielding said “the Irish banks have let us down by dragging their collective heels in the implementation of SEPA”.

He said it was regrettable “but proper that the EU has intervened to prevent a disaster because of bank negligence and mismanagement. Given more time it is now imperative that the Central Bank take a more active role in ensuring that at least the banks trading in Ireland will be fully ready by August. This will mean less error handling costs for business”.

He said it was essential that banks and payment service providers “deliver good validation tools and test facilities to ensure that payments are successful by August implementation.”

Financial technology firm Sentenial welcomed the commission’s decision. The company’s technology is used by 5 out of Europe’s top 10 banks and the main Irish clearing banks.

Sentenial founder and chief executive Sean Fitzgerald said it had been consistently warning that companies had not been allowed sufficient time to accommodate the complexities of SEPA. “Today’s announcement is welcome as it will avoid the potential for payments chaos which underprepared businesses would have experienced if the 1st February deadline was rigidly enforced,” he said.

When SEPA comes into force the eight-digit bank account number and six-digit sort code that most consumers are familiar with will be replaced by BIC and IBAN numbers, which are up to 22 characters long.

Transferring money will take one business day, whether the cash is going to neighbouring banks in Ireland or across Europe and the costs will be the same because under the new system banks will not be able to charge more to transfer money within the SEPA area than they do for a domestic transfer. This is likely to see charges fall in the Republic.