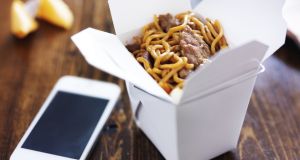 Smartphones are seen as a key driver in the growth of takeaway services. Photograph: Getty Images

Irish consumers spend €1.45 billion on takeaway food ordered from 3,000 different restaurants that employ 25,000 people, a new report into the sector has found.

And the sector is likely to get considerably bigger, with growth in online ordering set to increase by as much as 60 per cent over the next four years as more and more people rely on smartphones to have the food delivered.

The report from consultancy firm DKM and commissioned by food delivery site Justeat.ie, found that the takeaway industry was directly responsible for 24,900 direct jobs in 2,995 establishments .

It found that the takeaway sector sourced almost €700 million from Irish suppliers annually, contributed just over €1 billion to Irish GDP and delivered almost €450 million in tax revenue to the Exchequer last year.

For the purposes of the study, the takeaway sector was defined as any restaurant, café, takeaway or eating establishment offering food to consumers, either for home delivery or for collection. If a restaurant sold both eat-in and takeaway food, only the takeaway aspect was considered.

While growth in the sector is healthy, with the research suggesting that the overall takeaway market will grow by 17 per cent by 2020, it is the online space where expansion is forecast to be strongest

The report suggests that the takeaway sector could potentially grow by between 40 and 60 per cent over the next four years.

This takes into account overall household consumption growth, expected changes in population structure and also recognises the critical role that smartphone technology and mobile broadband will play in facilitating expansion.

Recognising the potential of both online and app ordering, companies such as pizza chain Domino’s have pushed hard with technological advances. Its pizza tracker, which allows customers track their pizza’s progress, has been downloaded more than 10 million times in Ireland and Britain while 75 per cent of its orders are now online.

The managing director of Justeat.ie, Amanda Roche Kelly, said the report highlighted how the growth in smartphone penetration was affecting consumer behaviour and in the case of the takeaway sector, driving growth.

“We believe that the role of technology in helping a traditional industry to innovate and grow has only just begun,” she said.

“This sector is a model for other parts of the economy where technology can play a positive and disruptive force - delivering growth that previously would only have been dreamt about.”