Ireland should focus research effort on a single challenge: dementia is the one 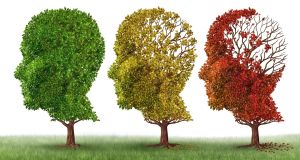 A child born today has a one in three chance of developing dementia and, so far, there is no promising research into a cure, according to head of research at Fujitsu Ireland, Anthony McCauley

The annual Fujitsu Forum is a big corporate love-in for the Japanese technology giant and its clients, and last week’s gathering in Munich was no exception.

Fujitsu began life 80 years ago as a telecoms company and is now one of the world’s largest information and communication technology (ICT) companies, with 160,000 employees worldwide.

In Munich it confirmed a corporate shake-up, hiving off its computer and mobile phone divisions into subsidiary companies. By presenting in Munich its new “Stylistic” tablet-laptop hybrid, Fujitsu hoped to banish speculation that it plans to abandon devices.

All the same, president Tatsuya Tanaka made clear Fujitsu has bet the farm on big data, cloud computing and servicing the needs of the world’s biggest companies.

The Munich gathering is also a forum for the work of Fujitsu Ireland and its Kiduku project.

This three-year research collaboration with Insight@UCD and the HSE aims to use technology and the data it generates to extend older people’s independence in their homes before full-time care is required.

For Fujitsu, the plan is about convincing governments of ageing societies to spend money on technology now to save much more money later on old-age care.

Duncan Tait, a Fujitsu board member and head of operations in Europe, the Middle East and India, says the Irish healthcare research fits in perfectly with the restructured group’s new focus on digital systems.

“We have done some brilliant work in Ireland, ” he said. Results are now filtering in, he says, a tribute to the “really fast” research and development collaborations with the Government and universities.

“We have several life science companies interested, talks are happening now, and I would hope to have results by this time next year or even earlier,” he said.

Contrary to the reputation of big business pushing research with quick-to-market potential, he insists Fujitsu is big, patient and deep-pocketed enough (2014 net income €1.1 billion) to back what he calls “long-term bets”.

In a world of growing population and finite resources, for instance, the corporation is financing agricultural technology that he hopes will produce win-win results.

Mental health is another challenge of a scale societies are only beginning to grasp, he says.

“I think [Ireland] is a template for how we should work, if you want to move fast you need to co-create,” he said.

Praise like that is music to the ears of Fujitsu Ireland, including head of research Anthony McCauley.

For him, their Irish work has demonstrated how technology can deliver on the promise of allowing older people live independently for longer.

Proof of the potential is the “Great Northern Haven”, a purpose-built development of 16 smart apartments in Dundalk that form part of the Kiduku research project between Fujitsu, the HSE and UCD researchers.

Employing wearable sensors and around 110 ambient sensors in the smart Dundalk apartments, the project has pioneered ways to monitor health declines that might otherwise go unnoticed, allowing earlier remedies and medical interventions.

“The number one challenge is how do you get people to accept technology, and the only way is if it is giving value,” said McCauley.

“If it changes my health and wellbeing and keeps me out of hospital, stops me having to take medication, maintains my quality of life, then I’m all for it.”

For McCauley, who came to Fujitsu in 1998 after working for Digital, one of his jobs as head of research is to look for promising incubators and accelerators for projects worth watching, backing, or partnering in the search for the state of the art.

“And in the last five years I am increasingly impressed that Ireland is becoming a very entrepreneurial ecosystem,” he said, with noticeable growth in universities taking on research and development projects with a view to marketing products and services, and students conditioned to thinking of how to pitch projects for funding and marketplace introduction.

But does that not harbour a risk of a market-optimised landscape here: a haven for commercially-driven research and a desert for fundamental, long-term research?

McCauley says it is important to strike a balance and that fundamental research remains key, particularly in finding answers to pressing issues of our time. Such as?

“A child born today has a one in three chance of developing dementia and, so far, there is no promising research into a cure,” he said.

Given it is going to cost governments a small fortune to deal with, they would be well-advised to fund innovative research now to solve the problem.

Ireland’s star is rising in research circles around the world, he says, giving the Government a unique window of opportunity to invite world-class players around a table for a conversation on dementia.

“If Ireland said tomorrow we are throwing down the gauntlet to tackle dementia, I’d bet dollars to doughnuts that institutions and companies would come to them with funding and other resources,” he said.

“The biggest thing I’ve learned in the last five years is that a search has to be problem-based,” he said. “The biggest excitement researchers have is when they are confronted with someone saying: here is the problem, here is the data, can you use this to fix the problem we have?”

As we were speaking in Munich, Chuck Feeney’s Atlantic Philanthropies announced plans for a $177 million multi-year grant into dementia research, shared between Trinity College Dublin and the University of California at San Francisco.

If the Government decided to, would Fujitsu sign up to make Ireland the world’s leading research hub on tackling dementia?

“We would absolutely talk to the Irish Government about that,” said Fujitsu board member Gordon Tait.

A senior Fujitsu manager in Europe is even more encouraging off the record. Given Ireland’s stellar research record in the last years, Fujitsu would be “mad” not to come on board – if the signal comes from the Irish Government.