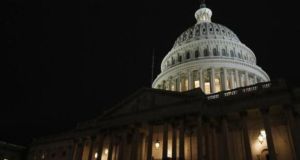 More than 70 US companies have shifted their tax domiciles to foreign addresses since 1983, mostly relocated their headquarters to Ireland, the UK, the Netherlands and Switzerland. Photograph: Reuters

The attraction of Ireland’s low-cost tax regime to American multinationals has again come under the spotlight in the US Congress after a new report found that dozens of corporations have moved their legal addresses to Ireland and other overseas locations over the past two decades.

In all, 76 US companies have shifted their tax domiciles to foreign addresses since 1983, according to the policy research arm of Congress. The companies have mostly relocated their headquarters to Ireland, the UK, the Netherlands and Switzerland.

Top ranking Democratic congressman Sander Levin posted the report from the Congressional Research Service in his push to pass legislation that would make it more difficult for US companies to shift their headquarters overseas to reduce their American tax bills.

The practice is known as inversions where an American company acquires or merges with a foreign company that allows it to relocate its legal address for tax purposes outside the US to avoid paying the high American corporate tax rate of 35 per cent.

The report refers to inversions by US companies in recent years involving Irish-based firms including pharmaceutical companies Elan, Mallinckrodt and Warner Chilcott to benefit from the lower Irish corporate tax rate of 12.5 per cent

Mr Levin, a ranking member of the powerful House of Representatives Ways and Means Committee, introduced legislation in May that would tighten rules to limit inversions.

The Michigan congressman’s brother, Senator Carl Levin, who questioned Apple on its tax-reducing use of Irish companies at a Congressional hearing last year, introduced similar legislation in the Senate in a coordinated bid to crack down on corporate tax practices.

US medical technology company Medtronic announced last month that it would buy Irish rival Covidien in a partly tax driven $43 billion (€32 billion) deal that would see the company’s headquarters move from Minnesota to Ireland.

“Barely a week seems to pass without news that another corporation plans to move its address overseas simply to avoid paying its future share of US taxes,” Congressman Levin said in a statement.

“These corporate inversions are costing the US billions of dollars and undermining vital domestic interests. We can and should address this problem immediately through legislation to tighten rules to limit the ability of corporations to simply change their address and ship US tax dollars overseas.”

The Congressional joint committee on taxation estimated that the proposed legislation would save more than $19.5 billion over 10 years.

Political opposition among Republicans and some Democrats amid the general partisan gridlock in Congress means legislation reforming US tax law is unlikely to pass any time.

International law firm Cadwalader posted an online information note to clients yesterday, as first reported by Reuters, saying that its chairman-elect James Woolery met Taoiseach Enda Kenny and Minister for Finance Michael Noonan among others on June 25th to discuss the increase in the number of US-to-Ireland inversion deals.

“The country’s tax regime is coming under increasing scrutiny by the EU for the aggressive tax planning strategies undertaken by foreign multinationals, a practice termed ‘brass-plating,’” said Cadwalader.

Such deals involve a relocation to little more than a new foreign postal address where it maintains few employees or operations.

The law firm said that beyond the risk of reputational damage, senior Irish officials noted that the trend of inversions may place Ireland in “an untenable fiscal situation” where the gain in tax revenue from redomiciled corporations is more than offset by the accompanying increase in the nominal gross national product used to calculate Ireland’s contributions to the EU budget.

“The resounding concern is that Ireland bears the brunt of the reputational and economic impact of inversions but reaps little of the job creation, substantive investment, economic growth or other tangible benefits typically afford by traditional foreign direct investment,” said Cadwalader in the note.

“It is important that US and other multinational corporations seeking to re-locate in Ireland do so with an eye towards making meaningful connections with the country.”

The European Commission announced an investigation last month into whether Apple’s tax arrangements with Ireland constitute a breach of EU state aid rules.