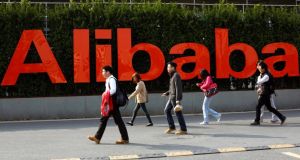 The upcoming initial public offering (IPO) of China’s ecommerce giant Alibaba looks set to turn into a fees bonanza for some of Wall Street’s biggest banks, according to reports. Alibaba is China’s answer to Google and is expected to pay 2 per cent of the gross proceeds it raises to cover expenses associated with its stock market listing.

With Alibaba expected to seek at least $20 billion from the IPO, this would mean fees of $400 million or more for a raft of advisers. Such a payday would rank as the fourth largest in history for banks working on an IPO, according to Dealogic. It puts the amounts paid in fees for Irish IPOs in the shade, although advisers here seem to fare better relatively speaking than their international counterparts.

Irish hotel operator Dalata paid €10 million in expenses for its successful IPO in Dublin and London this week, which was handled by stockbroker Davy. This was the equivalent of 3.8 per cent of the €265 million gross proceeds of the listing.

Hibernia Reit (Credit Suisse and Goodbody were the lead advisers) paid out 3.5 per cent in expenses from the €365 million it raised last year, while rival Green Reit handed over the same percentage – €10.8 million to be precise – of the €310 million it generated from its IPO.

The figure was even higher for Game Account Network, which paid €2.2 million in expenses from the €17.9 million it raised from investors when it floated in Dublin and London last year, with Davy as its nominated adviser. This means it spent 12.2 per cent of the proceeds generated from the listing on fees to advisers.

On taking office in 2011, Enda Kenny said he wanted to make Ireland the best small country in the world in which to do business. It seems that it already is for our stockbrokers and assorted IPO advisers.