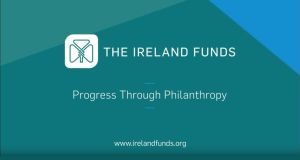 The funds is seeking to recover damages of $958,000 and exemplary damages of $1.9 million against Karla Stover, formerly the charity’s director of its Texas region.

Members of the board of the funds have been asked to donate an extra $10,000 each to help plug the hole left by the alleged embezzlement, and to provide a signal to donors of their confidence in the charity, which provide grants to projects on both sides of the Border.

In the normal course of events, board members donate $10,000 each year to the charity. Following the emergence of the alleged fraud, funds chairman John Fitzpatrick, who owns two hotels in Manhattan, asked board members to make a once-off additional payment for the same amount to generate an extra $500,000 for the charity.

Mr Fitzpatrick told The Irish Times that the board’s move showed “true commitment and philanthropy at its very best”. He described 2018 as a “difficult year” for the funds, after the alleged fraud was uncovered.

Mr Fitzpatrick is stepping down as chairman having served two terms, with New York-born former banker Eugene McQuade elected to succeed him from January 1st.

Mr McQuade has been involved with the charity for the past 25 years, including a decade on the board, and said he is “excited” to take on the role of chairman to do “great things for communities across the island of Ireland”.

The bill for legal and other costs associated with dealing with the the alleged fraud at its Dallas office currently amounts to $1 million.

The funds is seeking to recover damages of $958,000 and exemplary damages of $1.9 million against Karla Stover, formerly the charity’s director of its Texas region.

Ms Stover has pleaded her fifth-amendment right under US law to protect herself against self-incrimination. The case is set for trial in February.

The US filing notes that the funds has “revised policies and procedures related to procurement, hiring procedures and oversight of financial activities”.

Mr McLoughlin was not paid a bonus for 2018. He stepped down from the charity in late 2018, with David Cronin appointed as its new chief executive earlier this year.

The Ireland Funds America filing shows that its revenue fell by 12 per cent last year to $28.9 million. The charity donated $20.1 million during the year via 684 grants. This included $68,000 to Abbey School, Tipperary, to fund scholarships to help disadvantaged children go to third-level education, and $15,000 to Pushkin Trust in Co Tyrone to fund a series of environmental and creative workshops for primary school children from different religious backgrounds.