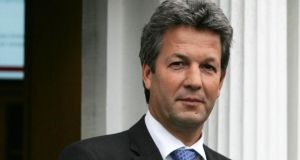 Mark Ennis of Invest NI: “What is particularly pleasing is that within these results is a strong set of achievements by local businesses.” Photograph: Cyril Byrne

The North’s business development agency helped support the creation of nearly 7,400 jobs during 2012 and 2013, according to Invest Northern Ireland’s latest end-of-year results.

The majority of the new jobs, 4,596, were created by indigenous companies while 2,794 jobs were generated by externally owned organisations.

In contrast IDA Ireland, the Government agency responsible for attracting foreign direct investment in the Republic, reported the creation of 12,722 new jobs during 2012.

According to Invest NI the 7,400 new jobs created in the North during the course of this financial year will deliver a salary boost worth £111 million for the local economy.

The chairman of the government agency, Mark Ennis, said Invest NI had in total supported nearly £608 million of investment in jobs, research and development projects and skills programmes by companies in the North over the course of last year and 2013.

In its end of year report, published yesterday, the agency highlighted successful foreign direct investment projects such as the 200 jobs created by Caterpillar in west Belfast and expansions by local companies in Tyrone, including TES NI and Edge Innovate over the last 12 months.

In its year-end report for 2012 the IDA emphasised significant investments by the likes of Apple, Paypal, Northern Trust and Fidelity.

Mr Ennis, however, maintained that Invest NI had enjoyed a “very successful year” in terms of performance against corporate targets despite the ongoing economic downturn.

“What is particularly pleasing is that within these results is a strong set of achievements by local businesses.”