Using technology to bring focus to the classroom

Innovations like interactive desks and personalised software can engage students 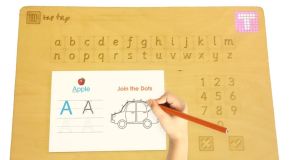 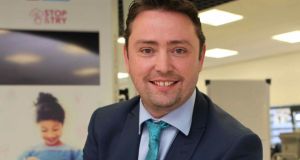 Stephen Collins, one of the brains behind Tip Tap Tap.

When I think back to my school days one thing I really had an issue with was concentration – not much has changed since, and this was before mobile phones, iPads or even dare I say it, the internet. Luckily with the help of new innovations coming our way, the future of our children’s education is looking brighter. There is learning at your own pace, interacting directly with your teacher simultaneously to your desk neighbour and games, yes games, to help you concentrate more. Now that doesn’t sound like a bad deal, does it?

One such innovation is an interactive schooldesk created by Tip Tap Tap. Founders Juan Martinez, Kevin O’Mahoney and Stephen Collins all met through their work at Nimbus research centre in Cork Institute of Technology. With Martinez researching touch sense technology in everyday objects and O’Mahoney researching gesture interaction the pair’s works interlinked and out of it came a desk for school children to enhance learning in the classroom.

The desks are wooden and designed for early years learning, the three- to eight-year-old age bracket. Sandwiched between the wood is a layer of technology as company chief executive Stephen Collins explains.

“Right now inside in the classroom a teacher will ask a question, kids will raise their hands and generally only one or two kids are chosen to give the answer, the other 20-25 kids have to wait for the next question.

“The idea behind Tip Tap Tap is when a teacher runs a mathematical application through our cloud-based system – let’s say two plus two is on the white board – every child in the classroom can participate and interact with the learning content. Every child can use the desk simultaneously to respond and submit their answers.

This technology gives the teacher a digital image of what the child has done and in some cases the teacher can correct work and give direct feedback.

Another innovation in the early learning space is Nuala Kelly’s BubbleSkool. Intended for children from fourth class up to Junior Certificate students. The software suite offers the user to input original curriculum content which is then broken down into smaller sentence structures to highlight different sentence parts aiding the child to memorise the words. BubbleSkool is the original model which is now going through a redesign to keep it current with advanced graphics and design.

“So I have the concept, it’s about trying to develop it into a tool or a package that would appeal to young teenagers and 12-year-olds,” says Kelly.

“As a parent I’ve a child who is dyslexic but a very high achiever and is well able to learn. I thought he would have been at a disadvantage because he wouldn’t have the processing speed, or the reading speed that other children his age would have, therefore it’s an uneven playing pitch. I was trying to find something to level things up for him that he could learn the same things his class mates were learning but be able to learn it in his way.”

Adaptive learning is something Edtech Company Adaptemy specialise in. Their products are aimed at secondary school education and work very much on the premise that not one size fits all when it comes to student learning. The software they have designed profiles the learning capabilities of each student and delivers the course work to them accordingly.

“It’s really popular in Junior Cert maths in Ireland, that’s where we started in Junior Cert and Leaving Cert maths, the Junior Cert here it’s very popular. It works very well first of all in maths because a lot of people suffer and it’s a very important subject, says chief executive Conor O’Sullivan.

“We started with maths because that was the most urgent then we moved to science and we’ll work our way through the subjects after that.”

Adaptemy is also at use in Spain, Germany and most recently Slovakia. While they don’t sell directly to schools they licence their technology to educational publishers and it is used in schools in Ireland through the Folens Build Up product.

We all know that lack of concentration can be a key factor to how well a child learns, not alone for children diagnosed with ADHD but in general there are so many other factors that can lead to poor concentration in the classroom.

Using brainwave technology Dublin-based company Cortechs have come up with a unique headset and game that can help tap into the child’s concentration, improving their learning capabilities. With a BSc in Neuroscience and PhD in neuropathology, founder Áine Behan says: “We build brainwave technology that builds resilience into how we can adapt our brain for better use. You can use brainwave technology to retrain your brain to learn to regulate behaviours and improve behaviours. We’ve built this in to games for viewer platforms. We currently sell a game and headset bundle that kids, aged six to 10, can then use to become more attentive or more focused.

“The headset that you’re wearing has this little sensor that sits on your forehead and from that location on your brain we can tell how focused and relaxed you are by the brainwave electrical activity that goes on underneath the sensor. It is then sent by Bluetooth to the backend of our game Zip and that basically allows Zip to respond and reward you within the game for the more alert and the more focused you are in the game.”

Cortechs recently piloted the game Zip and the Misty Mountain in St Oliver’s National School in Clonmel, Co Tipperary. The children aged between six and nine used the game three times a week for six weeks.

“Kids love it, they adapt very easily to it. With the pilot what we’ve seen is the brainwaves correlate with how much attention the kids are paying, the whole idea is repeated game play. The kids can become more focused and attentive over time. With a significant number of the kids what we can see is that they are moving their baseline of paying attention, it’s improving and they’re spending longer periods of time being more attentive. That’s what the anecdotal evidence is showing us from the pilots and with the design of the game and with how the kids are interacting with the game we’ve received positive feedback from both the parents, teachers and principals.”

I can see how every one of these products could have improved my early learnings. Just imagine, if we were as lucky as the school children of today, being exposed to new developments in learning through new innovations embracing new technologies, goodness knows where I might have ended up…