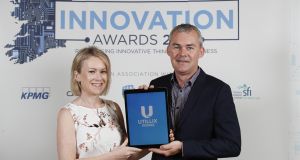 The cost to construction companies and developers of striking underground utilities in the course of project work is potentially enormous while the danger to workers can be grave. Electric cables, gas mains, water pipes, phone and data cables are just a few of the utilities which can be hit by unsuspecting workers.

The problem is that it can be very difficult to tell what lies beneath your feet before you put a spade in the ground without investing in expensive radar equipment first. And even then, these systems will not pick up everything.

These issues could be a thing of the past thanks to a new smartphone tool developed by Irish owned company Utillix. The Utillix App allows users to view underground infrastructure locations prior to excavation. By using the GPS function on the device, the app automatically shows all underground utilities and services precisely where the user is working.

The information on the app is sourced from the utility companies such as water companies, energy suppliers, telecommunications companies, gas Companies, and son on and stored on a centralised database maintained by Utillix. In addition, users can upload additional information on infrastructure they install or on utilities they discover which have not already been recorded.

The app is the brainchild of Oliver Morrissey, an Irish construction professional who moved to Australia in 2011 as a result of the downturn in the industry here. “From working in management in construction industry I knew about the problems related to utilities strikes and about the problems presented by looking for utilities”, he says. “I searched for a solution but there was none to be found. This identified a gap in the market for us. We knew it was a major problem and we put a development team together to solve it. The more we looked into it the more we realised there was a market to service.”

That led Morrissey to establish a development team in Sydney. “We built a team and worked with them for a few months whiteboarding and brainstorming and so on. We then went into development and we now have apps for IOS and Android and have customers Australia, the UK, Ireland, Saudi Arabia, the US, and South America. We spent about a year and a half developing it but I don’t think we will ever be finished with development. We keep adding to it. As technology advances we will continue to develop it. We are always getting feedback from users and customers and we listen to this and take it into account for future advances.”

The data at the heart of the app mainly comes from utilities and local authorities but user upload facility is also critically important as this allows the database to evolve and grow with user experience. For example, records of where utilities infrastructure has been laid are not always completely accurate or comprehensive and the Utilix app will help tackle that problem.

“If a user finds a utility that’s not included it can uploaded. Also, if a plumber comes to your house and lays a water line they can upload that on to the map. This will show what they have done and it will be there for other contractors who may work on the house in future.”

The business model is to charge a monthly fee per user and the market response has been very encouraging. “Business has taken off”, says Morrissey. “Customers get a free app to play around with initially. They can then upgrade to a paid subscription. There is also an enterprise app which synchs with a web portal which links the office with the field staff. We have several thousand end users at present and the business is really starting to snowball now. We will be looking at 3D mapping and augmented reality next. In future, users might put on a headset like Oculus rather than looking at it on a phone.”