A prevention and cure for equine malady 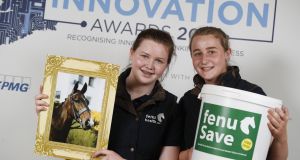 Entrepreneurs don’t come much younger than the founders of FenuHealth, horse-mad sisters, Kate (17) and Annie (15) Madden. They have been riding since they were able to walk, their grandfather has been breeding national hunt racehorses for over six decades and conversation over family meals is invariably about horses, Kate Madden says.

In 2015 the sisters entered the BT Young Scientist exhibition with a study that looked at encouraging horses to eat by adding flavours to their feed. Little did they know that two years later what started out as a science project would turn into a business involving eight people, and with exports to 12 countries over four continents.

FenuHealth produces powdered supplements that are sprinkled on top of equine feed to help prevent and solve the big problem of gastric ulcers in horses. “Around 90 per cent of race horses and 70 per cent of sport horses have gastric ulcers because horses produce acid all the time, not just when they eat,” explains Kate Madden. “Horses in the wild are constantly grazing and have food in their stomachs all the time whereas this is not the case when horses are stabled.”

The Madden sisters discovered that one of the flavours horses love most is Fenugreek (hence the name of their business) and it is combined with a mix of other herbs to help reduce the acidity and quantity of gastric juices. “We use 100 per cent natural ingredients and our products are fully tested and certified and meet all the standards set down by the Turf Club, the Jockey Club, the FEI (international federation for equestrian sports) and the International Olympic Council, ” Madden says. “Our products can be used on the day of a competition or a race. Other products have to be stopped at least five days before. Our products are easy to administer and very affordable and we’d like to see all owners put their horses on FenuSave to prevent gastric ulcers or FenuCare to treat them.”

The business has received support from Meath LEO and Enterprise Ireland while the bank of Mum and Dad ponied up to pay for the first batch of product to be made. However, Madden says that all borrowings were paid off and the business was generating healthy sales just three months after its official launch in April last year.

Having a good business idea is one thing – getting it up and running and products onto the market with such speed is quite another, and this is where the story of this startup becomes a bit like a fairytale. The sisters had come second in their category in the BT Young Scientist competition with their flavoured foods project and their success caught the eye of Michael Connolly of animal feed and nutrition company, Connolly’s Red Mills. He contacted the sisters and subsequently became their “knight in shining armour” and helped shepherd them through the process of commercialising their idea. This included introducing the sisters to contacts within the animal nutrition and bloodstock industries, throwing his considerable commercial weight behind their enterprise and arranging for the sisters to attend the largest biennial horse trade fair in the world in Germany.

“Michael Connolly has been absolutely amazing,” Madden says. “He helped us because he said when Connolly’s was starting off years and years ago another established business helped them.

Initially we were a source of amusement at the trade fair, but on day two people started talking to us and on day three they were queuing up to meet us. We got our first order for 1,000 units at that fair from a yard manager from Qatar. ” Another heavy hitter impressed by FenuHealth is trainer Jim Dreaper who asked the sisters to carry out research on gastric ulcers for him.

Kate Madden has just begun sixth year at school and with the Leaving Cert looming she says it will fall to Annie (who is in transition year) to make more of the running with FenuHealth for the next year. “We already have eight people looking after things like sales, administration and trade exhibitions as well as a distributor in Germany and a person in Qatar so the business is moving on. In total we now have eight products ready for market,” she says.