Making an epic hit out of a damp squib

Review: It’s Not About the Shark: How to Solve Unsolvable Problems. David Niven. Icon Books. €16.99 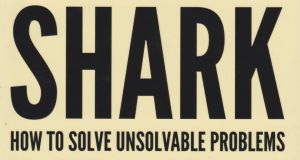 Book Title:
It’s not about the shark – how to solve unsolvable problems

Proving that necessity is indeed the mother of invention, David Niven’s book opens with the story of how the then-emerging film director Steven Spielberg made a crucial intervention in the filming of the blockbuster movie Jaws in 1975. The hugely expensive mechanical shark at the centre of the movie failed to perform, with its controls shorting out in the water.

Even its synthetic skin failed, as it became waterlogged and bloated, transforming it from terrifying shark to bloated marshmallow. Inspired by Alfred Hitchcock, Spielberg ditched the storyboards full of close-ups of the shark and tweaked the script. The solution, he realised, lay in downplaying the physical presence of the shark. Instead, the suggestion of the shark at the horizon line, aided by an ominous John Williams score, provided the chilling presence of menace. Problem solved.

Constantly thinking from inside is not the way to solve problems. You need to step back and reimagine the situation, is the lesson here – be it in business or other areas of life. Niven’s speciality is translating research finding into popular self-help genre titles. His previous books including The 100 Secrets of Happy People and related titles have sold more than a million copies in the US. In this latest book, he essentially weaves together a large series of anecdotes with a point – lacing it with a dollop of science – and does so in an entertaining and informative way.

Fear is a common theme throughout the book. It’s hard-wired into us from the ancient times we needed to fight sabre-toothed tigers but our brains have not expanded since to adapt to our new circumstances.

Fear keeps us from living full lives by putting our biggest worries in the centre of our vision. Many of us also think that having problems makes us more important.

Focusing on problems is an unproductive habit. It makes them seem bigger and ourselves smaller, resulting in us being less likely to persist with solutions.

Gut instinct often trumps research – but only where brave bosses show courage. Niven has an interesting passage about how the Seinfeld tv show almost never got made. The initial research on a pilot with a test audience was very negative.

Audiences thought it “too Jewish and New York” and hated the characters. The network went for a safer option, Sister Kate, about a nun who took care of orphans.

The pilot was aired as a filler on a summer evening and found a fan in an NBC executive who paid for four further episodes out of his late-night budget.

From this sliver of opportunity, Seinfeld grew to make the network $200 million a year in annual profits at its peak in the late 1990s. Niven has lessons here about the shortcomings of groupthink and about the dangers of overconfidence. There’s also a clarion call to experiment. We want to succeed so much that we attempt to cut out failure, often ignoring the many insights and learnings that we can gain from the process.

Do something out of order is another take on this general advice. When researchers in a US academic study had people do mundane things out of order, they produced an 18 per cent jump in cognitive flexibility scores that measure the capacity to build ideas from multiple concepts.

Radical and counterintuitive thinking can have profound results.