Antimicrobial coatings kill 99.99 per cent of harmful bacteria and fungi 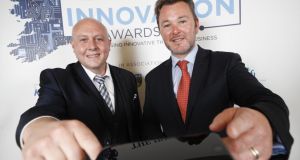 James Kennedy and Kastus founder John Browne: the firm’s antimicrobial spray coating can be applied to glass and ceramics during or after manufacture or added to plastics and paint.

Antibiotic-resistant superbugs are fast becoming one of the biggest threats to human health globally. The bugs, which include familiar names such as MRSA and E.coli, are proving extremely difficult to eradicate and pose a major threat to human life, the environment and the food chain. Determined to stop these bugs in their tracks is young Irish company Kastus which has developed a pioneering antimicrobial treatment that can be used to coat glass and ceramics or added to plastics and paint. The coating has a proven 99.99 per cent kill rate against harmful bacteria, fungi and antibiotic-resistant superbugs.

Kastus’s product can be applied during or after manufacture and the process involves spray-coating and heat-sealing the layer on to a surface to form a hard top layer. The coating uses a patent-pending zeolite – a mineral that can be readily dehydrated and rehydrated – and other active ingredients to achieve high bacteria kill rates without toxicity or nasty byproducts. Most industrial coatings currently available to protect surfaces use antibiotics in some form, which serve only to raise human resistance.

The company’s products are based on core technologies developed by Crest (Centre for Research in Engineering Surface Technology) at the Dublin Institute of Technology.

“Our technologies have achieved industry-best Log4+ standards against MRSA and E.coli in independent laboratory tests while cytotoxicity tests have proven them not harmful to human skin,” says John Browne, who set up Kastus in 2013 and has been involved with the project since it began almost 10 years ago.

The company’s current focus is on ceramics (sanitary ware), but its products have other potential applications including consumer electronics – touch screens, keyboards and smartphones – the food industry, the healthcare sector and the automotive, air and marine industries. Kastus is also close to finalising the development of a second product – a coating for metals such as taps and door handles, which are major sources of potential contamination.

Trials of the technology are almost at an end and the company is already working with three of the world’s top five ceramic producers.

“The testing has been painfully long, but worth it because the results have been so good,” Browne says. “We now have a complete dossier of proven results of the product’s efficacy and are ready to move on to the next phase. Our initial target customers are global OEMs [firms that make components that are purchased by other companies] committed to securing antimicrobial capability as a market differentiator. These top manufacturers account for up to 70 per cent of supply offering us a readymade, targeted market. I think people have realised that we have a suite of game-changing technologies of global scale and significance and this has attracted the attention of industry leaders. This strategy of validating what we’re doing through blue-chip customer collaborations optimises resources, shortens the decision cycle, builds market awareness and is highly cost-efficient.”

One of those quick to spot the potential of Kastus was entrepreneur Chris Horn, who helped the company secure €1.5 million in funding through venture capital company Atlantic Bridge’s university fund in 2016.

“This investment was a strong validation that our scientific research has great potential and it also allowed us to accelerate the testing and commercialisation of our technology,” Browne says.

The potential for Kastus’s technology is sizeable. A recent UK government report estimated that antibiotic-resistant superbugs could cost the global economy $100 trillion by 2050.

“Our patented glass and ceramic coating is unique in being indoor light activated – not requiring UV – and it produces a very thin, durable transparent film with no compromise on visual properties,” Browne adds. “It is also permanent, super hard-wearing, chemically benign and economic to produce. Critically, from an environmental compliance perspective, no silver is used in its manufacture and it produces no harmful byproducts.”

The Kastus team now stands at six and this is expected to reach 10 people by the first quarter of 2018.

“A key recent hire for us was James Kennedy, formerly of Athlone IT, who brought both scientific rigour and experience of commercialisation to the project,” Browne says. “He took everything back to first principles to ensure that we had every detail fully documented and were ready for what I call ‘the fun bit’ – finally getting the product out to the market.”