Canned air is no laughing matter

Once a Mel Brooks gag, now people are paying a lot of money for something with dubious health benefits 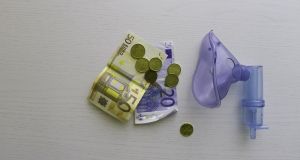 Perhaps the more concerning thing should be that, faced with challenges such as air pollution and the spread of viruses, our societal response is not to try to fix the source of the problems but to buy more products to try and mitigate their effects. Photograph: iStock

It seems to have started as a joke. Two friends decided to fill a small plastic bag with air from a hillside in Canada, and put it on eBay to sell for 99c. It did, and then the next one sold for more than €100.

It started as a joke even before that, though. In 1987 Mel Brooks directed and starred in a Star Wars satire called Spaceballs. Brooks’ President Skroob rules an evil planet that’s running out of air. Mere seconds after reassuring a journalist by phone that there’s no air crisis, Brooks rummages in a drawer and pulls out a can of Perri-Air and proceeds to take blissful breaths from the canister.

A daft joke, but surely dafter still that people are actually paying through the nose to do exactly this. Those two friends with the plastic bag of Canadian air were Moses Lam and Troy Paquette, who went on to set up a company called Vitality, which will now sell you cans of fresh, clean, Canadian air.

Vitality’s blurb promises “a business that will allow people from all over the world to experience health and wellness. Health and wellness they otherwise would not have been able to experience on a daily basis.” Back in June 2015, the company filled its first major order; 5,000 cans of air to be shipped to China. It seems to be no coincidence that areas of the world with major air pollution problems are those that are most likely to be home to eager custom for canned air.

Vitality is very careful not to make any specific medical claims for its products, but it nevertheless does try to push some very human buttons, playing on worries about overall health. “Our highest priority is the health and well-being of families,” says a Vitality statement, before going on to point out how its products might be helpful to mothers looking to stay sharp for their children, or for students or business people who need to boost their metabolism for a major assignment.

Vitality even takes aim at children, claiming that “clean, healthy lungs are what you want for active children to reach their potential”. It does not claim to be able to, strictly speaking, provide your children with those clean, healthy lungs, but the inference is clear. The company also provides cans of Rocky Mountain air “and purified it to give you high performance oxygen” which is claimed can boost athletic performance.

You can choose from where your air comes: Banff, an area of Canada, near Calgary, famed for its forests, mountains, and lakes; or from the Lake Louise area of Banff. You can even order flavoured air, infused with scents of raspberry or root beer. The cheapest product Vitality offers is a 130-gramme can of Banff air, with about 160-seconds’ worth of breathing.

Does any of this actually do you any good? In a word, no. The Irish Times spoke to Dr Marcus Kennedy, a consultant respiratory physician from Cork University Hospital. He says there is no measurable health benefit from cracking open a can of air. “There’s no study to suggest that there’s any measurable benefit. There may be some placebo effect, in that people might report feeling better after inhaling one of these products, and it may be that because they’re interested in something such as this, that they’re at the same time making other, healthier, choices in their lives.

“But really, you have to remember that we breath in about eight litres of air every minute, so if you’re taking in a given volume of air in a couple of minutes with one of these products, then what are you breathing for the other 57-odd minutes of the next hour?

“I can see no benefit for my patients, anyway. You’d be much better off working on your general fitness,” Dr Kennedy adds.

There is certainly something lucrative in the air, though. Vitality has a British sort-of-competitor called Aethaer. Aether’s approach is a little different while Vitality sells you air in sleek, compressed cans with breathing masks, Aethaer’s air is simply sold in glass mason jars. You can choose your air – from Yorkshire, Wiltshire, Wales, Somerset or Dorset, and the cost is about €111 for a jar. Aethaer doesn’t make as many direct claims for the efficacy of its air, and the way it is sold seems fundamentally more like a souvenir than a physiological aid, but the company nevertheless makes grand, sweeping claims about being committed to protecting humans from the environment as well as protecting the environment from humans. “Now with over 90 per cent of the world population unable to breathe clean air, air pollution has become our most immediate threat, and hence why it is our primary focus,” it adds. Alongside the charming mason jars, Aethaer also offers rather more sinister-looking face masks, which it says are both anti-virus and anti-particulate.

Perhaps the worrying thing is not that there are sufficient people out there with cash in their pockets to turn both Vitality and Aethaer into success stories; perhaps the more concerning thing should be that, faced with challenges such as air pollution and the spread of viruses, our societal response is not to try to fix the source of the problems but to buy more products to try and mitigate their effects. How much better off, overall, would the environment be if Vitality and Aethaer weren’t making their cans and jars, and then shipping them all over the world? Is the next inevitable stage a high-end hazmat suit, supplied with its own internal air system pumping the scent of Banff or the Yorkshire Moors around your body?

Whatever you think of the health benefits of canned air, it’s surprising just how influential Mel Brooks has been.