Business owners trying to make a difference to society

Review: Getting Beyond Better – how social entrepreneurship works 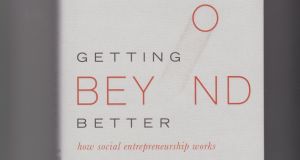 Book Title:
Getting beyond better – how social entrepreneurship works

At some point in the life of wealthy and privileged business owners, a desire frequently occurs to make a difference to society in some way and to apply those very principles that worked so well in business to making the world a better place.

The nature and methodology behind that work is the subject of a new book by Roger Martin and Sally Osberg. Martin is the well respected former dean of the Rotman School of Management in Toronto and the author of a number of highly acclaimed business books. Osberg, meanwhile, is president and chief executive of the Skoll Foundation, which has invested in more than 100 social ventures.

Andrew Carnegie and his foundation – which built 2,500 libraries around the world, including some in Ireland – is cited as a good example of a successful early social entrepreneur. A self-made businessman who came from humble origins, one of the defining moments in his life was gaining access to the private library of a local magnate, whom he then encouraged to open up the facility to others who had no access to books.

His life mission involved providing access to education to those who would not ordinarily have it. He was also a catalyst for change and his legacy includes a much larger public network of public libraries than those that bear his name.

The concept of equilibrium change is a defining theme for the authors. Social entrepreneurship is viewed then as the identification of an inherently unjust equilibrium that causes the exclusion, marginalisation or suffering of a segment of humanity – a group that lacks the financial means or political clout to effect transformational change on its own. This wrong is then addressed through an equilibrium shifting solution that ultimately releases trapped potential or alleviates suffering.

True equilibrium charge sets a high bar and it takes time to change as moving from one stable state to another. The book looks at a number of change-in-progress situations. There is also a deep connection between social entrepreneurship and advocacy.

Student-led approach Take the case of Vicky Colbert, who created a transformational student-led approach to the school education of children in Colombia. First, she acted to build a credible platform and from this she was able to push the Colombian government to adopt the approach she was taking, moving the agenda beyond what she herself could achieve.

The authors note distinct patterns in the way social entrepreneurs do their work. First, they need to understand the existing landscape, secondly, they need to envision a new future. Then they need to build a model for change and then scale that up. The four processes, or paths to transformation, are explained in depth in the second part of the book.

Scaling doesn’t happen by accident, it is noted here. Social entrepreneurs design explicitly for scale economies and take a systemic approach, leveraging other actors in an ecosystem rather than attempting to work as a solo actor. They also choose to be open source in their approach and encourage others to build on their models, either through arbitrage or through an enabling platform.

Corporations are far more restrained. As the authors observe here, Google expresses a desire to make the world a better place and supports a number of worthwhile initiatives through its charitable arm, Google.org. It also provides its search services free to users. However, it does not allow access to its precious algorithms, knowing that these are critical to its own ability to create shareholder value.

This is a well-researched and cogent look at the phenomenon of social entrepreneurship, with a useful roadmap for any philanthropically minded individuals or corporations.