Compelling insight into entrepreneurs such as James Dyson and Richard Branson 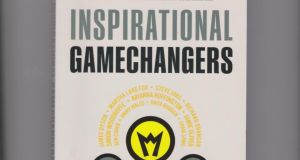 This is an interesting compendium of 30 business profiles of successful business figures from around the globe, based for the most part on interviews with the subjects. One of its key strengths is that the authors take a methodical approach to the task with the individual features on each subject ranged under headings such as critical challenge, impact and influence, and key learnings.

While this approach lacks the colour and character of a free-ranging interview style, it captures the lessons that can be learnt from these stories of success and how they might be applied more generally. The narratives are also grouped into sections on trailblazers, disrupters, value-led businesses, community players and up-and-coming influencers.

Some of the subjects are household names, such as Richard Branson, James Dyson, Arianna Huffington and Anita Roddick, and while their stories may be well documented, the authors manage to distil the lessons we can learn from these figures.

From Dyson we get the advice to view product or service improvements as an incremental rather than a one-step process, to find ways to finance development of your ideas despite interim lack of sales and to take on staff with fresh ideas and empower them to make creative decisions.

Another successful UK entrepreneur, Jacqueline Gold, boss of the Ann Summers business, displayed the courage of her convictions when met with opposition from authorities and scepticism from male investors but stuck to her vision. Talking directly to consumers has always been a key part of her philosophy and she is now a very active Twitter user with 45,000 followers.

Other lesser-known subjects also have interesting tales and lessons to impart. We learn how Todd Ostrander of Tectonic Audio Labs has made significant innovations in sound systems, such as those used in public events. Unlike traditional cone speakers, the technology his company is championing vibrates a hard surface to create amplified sound, similar to resonating the body of a violin or guitar.

The result is a pure sound that can be heard 165 degrees off axis, unlike a traditional speaker that can be heard at best only 120 degree off axis. It offers the potential to provide much clearer PA systems in the near future, in applications such as public transport and outdoor entertainment. This has been hailed as the most significant breakthrough in this area since the 1920s.

Todd’s advice includes finding great team players to work with, challenging them and then letting them get on with the task without being micromanaged. He also recommends getting validation for your product as soon as you can and identifying evangelists who will provide informed support for your product.

Having presented each of the Gamechangers’ stories, the authors look for common traits of these individuals. Gamechangers, they note, tend to have a strong sense of self, although not egotistically so. Independence is a common trait and few mention a significant influence from a long-standing mentor. Rather, they seem to either possess innate self-confidence or have the potential to develop self-confidence as they progress. They are not troubled by self-doubt and have the resilience to cope with the inevitable setbacks that occur on the journey to success.

The ability – and often the desire – to challenge the status quo is another common characteristic. Generating controversy does not worry them, and some even use it as an effective marketing vehicle. Many are also outsiders or at least different to the mainstream in one sense or another, whether that’s in terms of social or sexual orientation, or in relation to family groups or ethnic background.

They are also predominantly action-orientated individuals and problem solvers, interested in practical and applicable rather than purely theoretical results. They are also keen to be in charge. Control can be more important to them than making money and loss of that control can be devastating.

Thompson and Mellor have produced a well-crafted, tight and useful insight into the mindset of entrepreneurs.